Hello and welcome to Sunday Snog. This week a snippet from Secret Servicing, my m/m/m story in the new Stand to Attention Anthology released this week from Totally Bound. Watch out, there's lots of hot guys in military uniform about!

“Come here, Ken, I want what’s mine.”
My heart felt as though it had flipped, my stomach clenched and I flicked the stove to simmer to keep the mushroom risotto I’d cooked warm.
Finally, after two weeks away, my Jack was home.
I dashed across the kitchen, straightening the cutlery on the table set for two as I went, and careened into the hallway.
Would he have me there, straight away? Bend me over the cabinet holding our holiday photographs and plunder his needy, greedy cock straight into my arse?
I hoped so.
Perhaps he’d just kiss me, sweetly at first then ravenously, hungrily until we could take it no more, before he’d push me to my knees and have me suck on his gloriously thick cock until he came in a rush?
That would be good too.
Or maybe we’d dash upstairs, strip, and leap into the shower. He liked me to fuck him in the shower, loved the water slipping around my cock and onto his balls as I penetrated him, so he said.
I’d be up for that. In fact my dick already was.
“Hey, Jack, I’ve...” My words trailed off and my steps faltered.
Jack was not alone.
He stood, in his casual gear—thick boots, mud-brown combats and a tight black T-shirt—side-by-side a man in identical clothing.
A man I recognised as Slider, Jack’s long-term friend and fellow officer.
Their stances were mirror image. Feet apart, hands on hips, heads stooped slightly because of the low beams in the cottage hallway. The way their clothes hugged their sleekly defined muscles also matched perfectly.
The only difference was Jack wore a hat, a peaked cap, hiding his super-short crop cut, while Slider didn’t. His stubbly short hair was visible.
“Oh,” I said. “We have company. Hi, Slider. How are you?”
“Been a long time, Ken.” Slider nodded, his lips remaining in a tight line, his face as weathered and serious as I remembered it to be.
“Yes, it has.” I glanced at Jack, silently asking why he hadn’t let me know he was bringing a soldier friend.
Jack gave the smallest shrug and I remembered that he hadn’t taken his mobile phone, as was often the case.
“Yes,” I said, “it must be a couple of years since you visited, but it’s great to see you. I have plenty of dinner. Jack is always ravenous when he gets home.” But usually ravenous for me, I added silently, feeling hugely disappointed that I wouldn’t be getting up close and personal with the cabinet to my left, or dashing up to the shower to plunder Jack’s horny arse.
“I am,” Jack said, dropping the black canvas bag he was holding with a thump and stepping up to me. “Very hungry.”
He curled his hand around the back of my head, encasing my crown in his big palm, and leant down, his lips hovering above mine.
“And I’ve missed you,” he said, sinking his fingers into my long strands of hair. “So fucking much I could kill something.”
I gasped, pressed my hands over his chest and lost myself in his dark, dangerous eyes that were shadowed by his cap.
He never gave in to public displays of affection.
Ever.
It just wasn’t Jack.
“Killing is perhaps a bit extreme,” I managed as a tumble of lust rolled in my stomach.
The look he was giving me—it was that dominant, determined glint that made me want to obey, submit, fold to the floor.
His lips twitched, kind of a smile, then he kissed me. Not just a peck but a hard, passion-infused mating of mouths. His tongue searched for mine, thick, wet and insistent. Our lips moved firmly against each other and his breaths blew onto my cheek.
Eventually he paused for air and smiled down at me properly. “That hasn’t even begun to take the edge off my needs but it’ll do for now.” 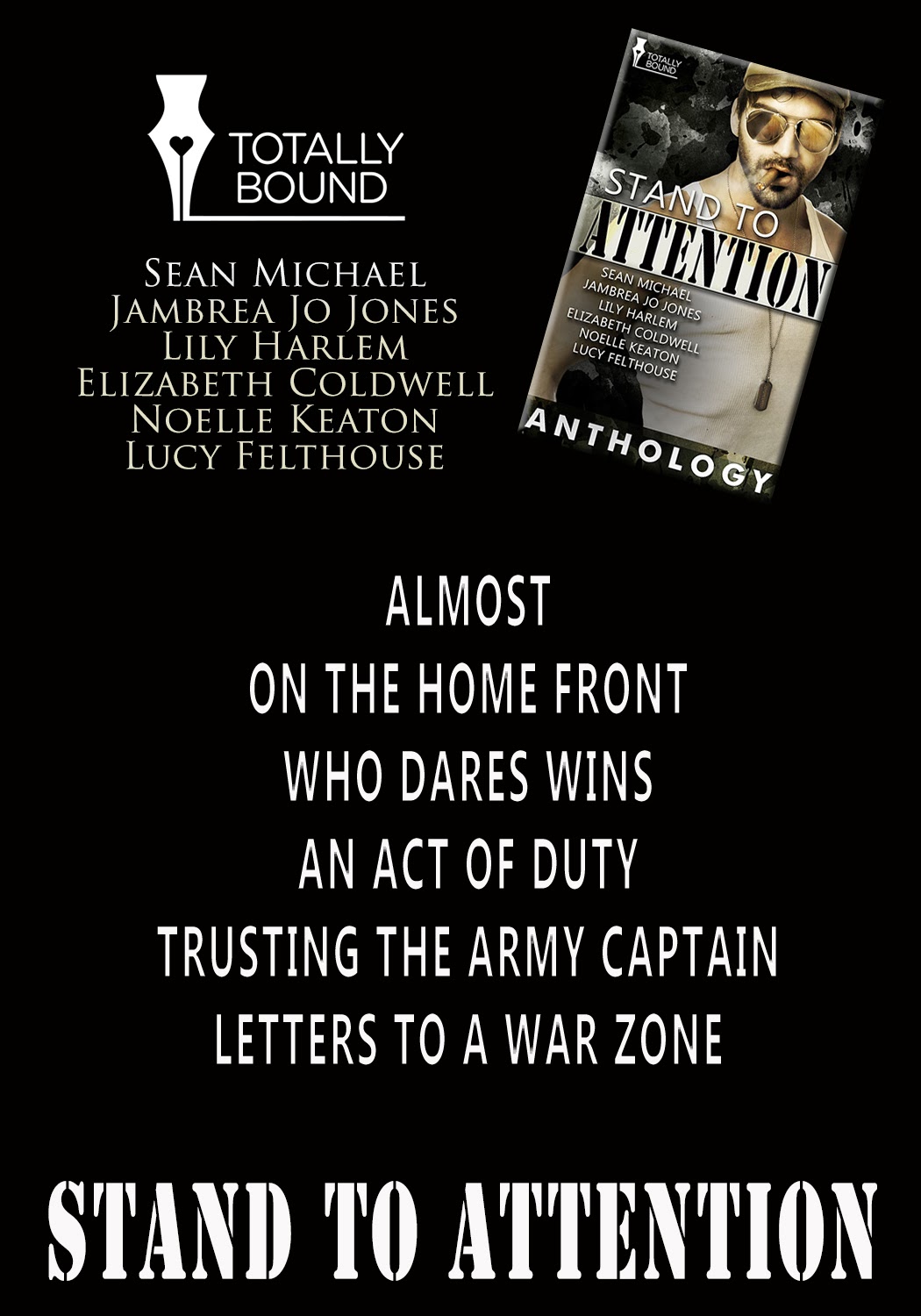 Grab your copy from Totally Bound, All Romance eBooks, Amazon, Amazon UK and all good retailers, in digital format and print. My story, Who Dares Wins, will be available as a single title on the 21st March. 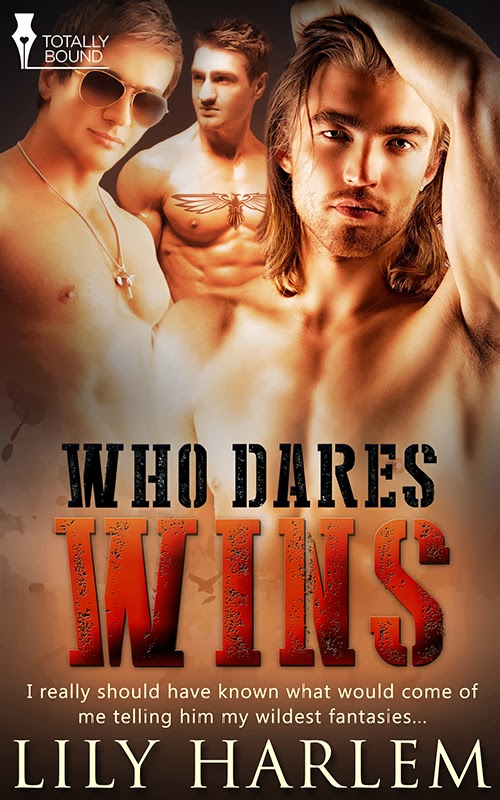