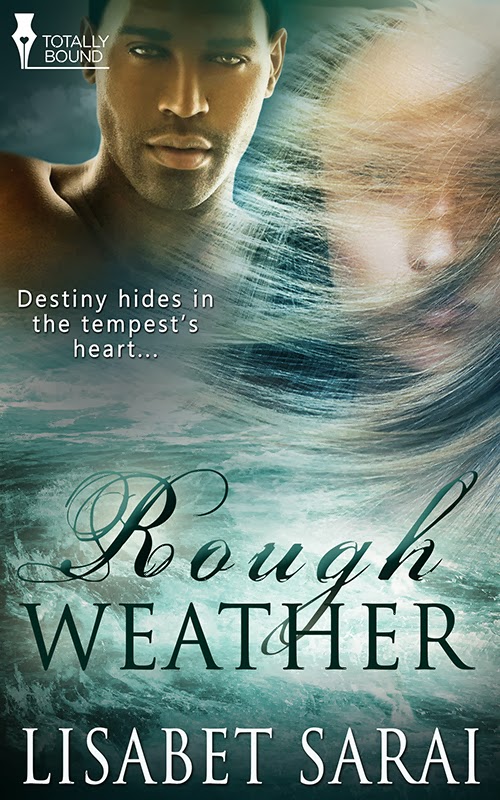 I just finished reading the new Coming Together collection Coming Together: Through the Storm, edited by Nicole Gestalt. This charitable anthology, which features some fabulous stories, benefits the victims of last November's devastating typhoon in the Philippines. The theme of the book is sex and weather, and let me tell you, the contributions include a lot of both – tornadoes, northeasters, hurricanes, wet sex, muddy sex, kinky sex, rubber sex – well, you get the idea, right? So go buy the book and kill two birds with one stone – turn yourself on and help the less fortunate!

My heroine Ondine has always felt at home in the sea. Orphaned at birth and raised by her grandmother on the island of Martha’s Vineyard, she has never really questioned her extraordinary affinity for the watery world. She concentrates on her work as a marine biologist, spends her weekends relaxing among the waves and worries about human threats to her beloved ocean environment. Fears of a deadly pregnancy like her mother’s make her cautious about sex.

When she encounters an attractive but arrogant engineer on her private beach, surveying the site for a prospective off-shore wind farm, anger is her first reaction. A casual touch, however, transforms that emotion to incomprehensible, irresistible, terrifying lust.

Ebony-skinned Marut has his own talents—aside from his uncanny ability to swamp Ondine with desire. He can control the winds and summon storms. He informs Ondine that they share a supernatural heritage and claims she is his destined mate. She responds with skepticism and tries to resist the charismatic Haitian, but ultimately her scientist’s training won’t permit her to deny the evidence of her senses—and her heart.

In writing this tale, I tried to capture the feeling of the New England setting, where weather is a constant preoccupation. (You know the old saying, right? If you don't like the weather, wait ten minutes!)  It's more lyrical and less raw than some of my stories, although it does have a bit of bondage.  (I couldn't resist...)

Anyway, I have a brand new excerpt to share with you here at Lily's today. If you're looking for something more explicit, check the snippet on my website.

I want to thank Lily for having me as her guest. Rough Weather is available now from Totally Bound. Plus, if you leave a comment here on this post, with your email address, you might win your very own copy of the book! Tell me about any experiences you've had with sex and weather. And in return, I might share some of mine ;^)

The winds of the northeaster still howled around them, but the surging ocean calmed, bit by bit. Gentle undulations rocked their bodies. She rolled Marut onto his back, her arm across his chest, and prepared to tow him to land.

“Uh—uch!” Racked by a fit of violent coughing, he sank beneath the surface for an instant. She hauled him up into the air and he twisted in her grasp, struggling to see her face. “Ah…uch…Ondine? Oh, thanks be to the loas! You’re here!”

“Don’t move! You’re injured, maybe badly…” She tried to flip him into a back float once more, but he squirmed like a snake in her arms.

“The storm…the plane… I had to get home to you…”

“Hush! Save your strength…let me…”

The wind snatched the words from her lips. Leaving the water behind, she rose on a pillar of air, cradled in Marut’s arms. He murmured endearments as they flew higher, covering her face with kisses. The gale swirling around them stole his words too, but she felt every one.

Now they were among the clouds, enmeshed in darkness with lightning crackling around them. Electric currents rippled through her flesh, awakening her senses. Marut’s eyes glowed with inner fire. He released her in order to tear off his tattered clothing, yet still the winds bore her up as steady as the waves below. Exhilaration and joy drove out any hint of fear. In perfect trust, Ondine surrendered to the prince of air.

The first brush of skin on skin kindled lust so fierce she nearly lost consciousness. Her body liquefied, vaporised, vanished among the fire-streaked clouds. Marut surrounded and invaded her, taking possession of his mate. More than willing, she welcomed him, opening both her body and her mind.

It was her dream come to life, but more intense, more powerful, more transcendent, because Ondine had abandoned the struggle against her nature and her destiny. He was her destiny, this hard-muscled, virile, tender man who could command the winds. As she was his.

Lisabet has more degrees than anyone would ever need, from prestigious educational institutions who would no doubt be deeply embarrassed by her chosen genre.  She has traveled widely and currently lives in Southeast Asia with her indulgent husband and two exceptional felines, where she pursues an alternative career that is completely unrelated to her creative writing.

For more information about Lisabet and her writing, visit her website (http://www.lisabetsarai.com) or her blog Beyond Romance (http://lisabetsarai.blogspot.com)