Sunday Snog - Anything for Him 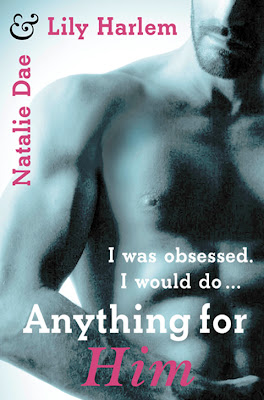 I prefer to chase the news, not be the news. But when the delectable Liuz, with his uncannily accurate perception of my secret desires weaved his way into my life, it wasn’t long before I was in way too deep, submerged and intoxicated with a passion I was afraid was more than I could handle.

Or was it? Because although my heart was overwhelmed with feelings I had no resistance against, and while my deceitful body was consumed by a burning passion, I still had a plan. A plan I prayed would keep me afloat as I was pushed to the very edge of my limits, while the journey got tougher than even my wildest flights of fantasy could have imagined.

I claimed him and I felt that he was rightfully mine. My heart simply couldn’t beat without a permanent connection between our hearts, minds and bodies. Losing was not an option, not when my sanity depended on winning him.

Because I would, quite literally, do anything for him.

‘Oh, fuck, Hannah. I have never been one for stamina in the morning, and you are about to fucking finish me off.’
His cheeks had risen in colour to a strawberry red, his bottom lip milky white where his top teeth were biting into it. He looked beautiful in his agonising battle with pleasure, and I knew I would paint him like this as soon as I got the chance. He would look magnificent on my wall in this frantic state.
I upped the speed, both hands assiduous in their task. My arms ached, but I didn’t care – this was not about me, this was about Liuz.
His groans got louder, more abandoned.
My heart thumped and sweat pricked between my cleavage.
He was getting close, so close now.
My body was buzzing too.
‘Ah, oh, God, Hannah,’ he gasped, peeling back his lips to reveal his teeth in a strained grimace.
His cock became dense, more solid, and his balls packed up into his pelvis. I stared at his cock-head jigging with the rapid movements of my hands. The whole glans was swollen like a ripe plum, and the slit deep and pliant within my movements.
Another drip of pre-cum, white against the redness, leaked out. He bowed his back off the bed, his head pressed into the pillow, and lurched his hips upwards for more of my touch.
‘Ah, yes, I am coming, Hannah – yes, yes – tak, tak.’
I released him, held my hands up high, fingers spread, and stared down at his abandoned cock.
‘Oh, Jesus, oh, God, no, no, fuck it, argh!’ He wailed as though in agony, his body writhing, twisting this way and that. The headboard was bouncing wildly off the wall with the full force of his furious tugging. ‘What the hell are you doing?’ he shouted, his cock, shiny and engorged, bobbing uncontrollably in the air.
Power seeped through me like slow-running lava, heating a trail of controlling emotions, new emotions. Watching Liuz squirming and needy, desperate for me, showed me a new, darker side to myself that I hadn’t known existed.
And just when I thought I could surprise myself no more.
‘Fuck, you think that is funny, do you?’ Liuz snarled. ‘Jesus, if only you knew.’
‘Ah, baby,’ I said, edging backwards when he wriggled nearer to me. ‘You really wanted to come then, didn’t you?’
‘You know I fucking did. Christ, you cannot do that to a guy, Hannah.’
‘I can, and I did.’
He was breathing fast through gritted teeth, a speck of saliva in the corner of his mouth.
‘Shh,’ I said quietly and tipped forward to kiss him. ‘It will be worth the wait, I promise.’
His eyes flashed with fury and were dark with desire. For a moment he looked as though he was going to snap his head away. But he didn’t, he let me kiss him, slowly and seductively, while his breathing settled.
Suddenly he yanked his arms again, with gusto, jerking both of us.
‘Liuz,’ I said, glancing at the delicate scarves. ‘You’re being a bad boy. I am going to have to tie you tighter.’
‘Jesus, Hannah,’ he said, crumpling up his nose. ‘Just get on and ride me, will you?’
Quickly, I left the bed, plucked two more scarves from my collection – one bottle-green and one cream with tiny love hearts – and wound them around his wrists, doubling the security and tension.
‘Do you want me to bind your legs as well?’ I asked sternly.
He glared at me, like he would have grabbed me, shoved me down and fucked me hard and fast if he could have.
But, of course, he couldn’t.
Scooting down the bed, I eased between his legs, licked my lips and watched his cock bob towards me. The engorged veins pulsated in time with my racing heartbeat.
‘I never teased you like this,’ he said in a shaky voice.
‘I think you’ll find you did, but in other ways,’ I said, purposely letting my breath breeze over his moist cock, knowing the cooling effect would be stimulation in itself.
His cock strained towards my mouth, and he groaned, a deep rumbling sound that originated low in his chest.
I poked out my tongue, and carefully, cunningly, swept up the clear bead from the slit. Liuz froze. It was as if every nerve and fibre in his body had honed in on that one tiny dent. I swept my tongue around the ridge, tasting the cocoa butter and Liuz’s unique, delicious, amazing dick flavour.
He was a mass of tremulous desire lying beneath me, but I wasn’t faring much better. His command to ride him had been hard to disobey and I knew now, I wouldn’t be far off doing just that. But I wanted him deep in my mouth first, I wanted to feel him nudge the back of my throat, feel a streak of thick pre-cum coat the base of my tongue. Parting my lips, I sank down, taking his cock as far into my mouth as I could.
‘Oh, fuck,’ Liuz groaned. ‘Yes, that is it.’
But I only gave him one – one deep-throated ride then pulled up, releasing his cock once more so it stood upright like a startled soldier, standing to attention.
This time he didn’t even bother to curse in complaint, he just moaned long and low then gabbled something in Polish.
But I was still touching him, fondling his balls and caressing the thin strip of skin towards his anus. He was so hot, so tight, so delectably lubricated, my fingers slipped and slid all over him, no part out of bounds, even the tight circle of his back passage.
Triumph welled within me, mixing with my lust to form an intoxicating rush of impatience.
He was mine and finally it was time.

Buy Links can be found on the Mischief webpage, Amazon US HERE