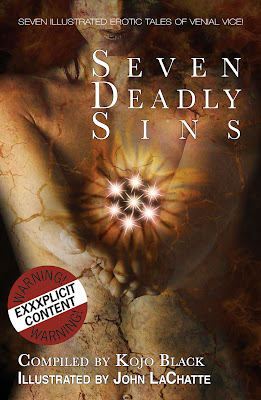 Wow, this has been a fun project to be involved in. Steamy stories and naughty authors,  a glass of wine (or two), some raucous singing and a shockingly late night - what's not to love?

So the end product is now available, but going right back to the beginning I should tell you that I grabbed myself the sin of ENVY - find out exactly how I claimed my favourite transgression by visiting KD Grace's BLOG - and to whet your appetite I'm going to share a Sunday Snog steamy excerpt - but be warned all the stories are off-the-charts HOT and the illustrations that go with them, phew... grab that glass of chilled water!

ENVY - Green-Eyed Monster - is about Helen's desperation to have a penis, and how she feeds her obsession by watching the gay couple in the flat opposite hers. Night after night, she strokes her strap-on, imagining herself with them, joining in the fun, being a guy too. Of course things move on from her being a voyeur, because sometimes dreams do come true - even filthy ones!

Suddenly he appeared in view again. Hair roughly dried, dark green towel wrapped around his waist. I could make out the bulge between his legs. Even flaccid his cock packed a good size.
He took another slug of beer then turned from the window and strode towards the hallway.
Quickly I fiddled with the straps on my cock, straightened them out and stepped in. I could get my apparatus on in a heartbeat these days I’d done it so often. Six months ago I would have shaken my head in confusion, now it was all that filled my mind. Wearing it, imagining it, longing for it.
What would it be like for real?
Another man, tall, blond, walked across the room with Dai. His name was Nick. Dai often spoke of his friend when we were waiting for the bus in the morning. I wondered if he knew how obvious it was from the light in his eyes that I’d guessed how much he loved him.
Dai smiled, spoke, then reached into the fridge and pulled out another bottle of beer. Flicked off the lid with a silver opener and passed the drink to his companion.
Nick sat on the armchair that was angled away from my window. Dai folded down opposite on a long, low cherry-red leather sofa. It had small silver feet that held it off the wooden floor and several over-stuffed black cushions lined the back.
I watched them talking and chugging on their beers. Wondering what two guys spoke about when no one else could hear. Lazily I stroked my cock, swiping my thumb into the slit and curling around the glans. I longed to feel dampness there, pre-cum, a sign that it was enjoying my ministrations.
Dai stretched sideways and put his beer on a table, beside a chrome lamp with a black velvet shade.
I gave a firm downward stroke so I applied pressure against my clit. It was clever, this strap-on, it had a hard, raised rubber patch in the panties that was designed to stimulate my tiny portion of pleasure-giving flesh.
I had to take what I could.
Nick moved to sit beside Dai. Reached over him and set down his drink. He stayed close, his lips curling into a smile as his his gaze dropped down Dai’s body.
Heat went to my pussy as blood pooled in my now stimulated clit. I knew what was coming next. It was always the same when Nick gazed at his lover then poked out the tip of his tongue, just a little, and licked his bottom lip.
I was suddenly aware of dampness on my inner thighs. My juice leaking through the gap in the crotch. I couldn’t ejaculate like they could. My arousal was more of a constant stream of moisture. Some women could, so I’d heard, but it had never happened to me. Perhaps I should work on honing that skill. But still, would it really be the same as having pleasure surging up and out in powerful jets? Would it be the release that twisted men’s faces, caused them to yell and grunt and turned every muscle and fiber in their bodies to granite?
Fondling the base of my shaft, just enough to rotate the rubber gently over my clit, I watched, utterly mesmerised.
Nick was kissing Dai now. Lazy, long kisses. Stroking his tongue over Dai’s lips as though he truly adored tasting him. Which I believed he did.
He’d meshed his hand into Dai’s hair, his palm covering his ear and holding him close. A heaviness grew in my belly. The possessiveness of the touch, the certainty of what was going to happen next had my heart beating faster. I knew they wouldn’t disappoint, these two guys of mine. They had no idea I watched their sexy escapades with such longing to be them, to have what they had.
To penetrate.

I hope you enjoyed that sexy moment between Dai and Nick as much as Helen did ;-), if you want more sinful snogs check out Victoria Blisse on Sunday Snog, and if you want to bag yourself a copy of the anthology, links are below...

Print - all print books have illustrations (one per story)

Penis Envy takes on a whole new meaning when Helen hatches a plan to use her own “cock” to its fullest extent!

My story, Green-Eyed Monster is also available as a single title ebook from Amazon and Smashwords - though it won't have the illustration with it.

If you want to find out more about Seven Deadly Sins visit my website page dedicated to this anthology. Don't forget to drop by Kd Grace's blog for more sinful gossip, and the other sinner's sites...

Have a great Sunday, thanks for stopping by,