Please welcome Sommer Marsden to my blog today...take it away Sommer...

A Sweet Touch of Sadness…

Juliet sees an opportunity to not only bring together the two lovers before Elijah’s inevitable death, but work through some of her issues with love and intimacy and moving on. It’s a bizarre threeway, don’t get me wrong, but the emotion I found surrounding me when I wrote it, was humbling. It was not necessarily a fun book to write—oh, some parts were, like the quirky next door neighbor, the crazy twin sister…the sex—but it was a meaningful book to write. It’s one that stuck with me well past typing the words THE END. I can only hope it will stick with the readers as well. 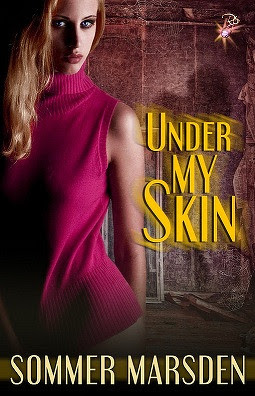 House bought for a steal online when it turns out there’s a damn good reason—check.

Malicious ghost with a body count to his name—check.

What’s a widowed medium to do when a departed soul asks to ride piggy back in her body?

To share her space and get under her skin? Juliet Bale does the only thing she can do—with her twin sister’s good counsel—she lets Lanie share her body to help her dying beloved Elijah cross over. The problem is that with all the reuniting, and sharing one body, things get seriously intimate and Juliet can’t help but see exactly why Elijah Rivers was so beloved.
It’s so wrong to sorta kinda fall for a dying man, and yet—check.

Excerpt from Under My Skin
© Sommer Marsden

“I’m telling you, Minnie, it feels off.” I tucked the phone under my chin and tried not to trip on the damn thing. My brand new kitchen had a way-old phone. It actually had a cord, for goodness’ sake.
“Off how? Off is relative when it comes to you, twin sister, dear.”
I snorted, and Minnie made a high-pitched sound that said she was laughing at me. “Har har.”
I slipped my silverware—triple wrapped in plastic—into my freshly washed and tidied drawer. I had just spent three hours wiping down the room and cleaning everything. I wanted it as spic and span as possible for me and my own energy. Most people don’t realize when you move in a new home, along with other people’s dirt, you get other people’s emotions.
“I mean, what is off, Juliet? Is the paint too bright or the window too small or…what?” My sister was mocking me.
“The energy,” I said, pushing a stack of brightly colored cake plates into a small side cabinet. “Don’t play dumb, Min. You haven’t just met me. You know, your sister…the sensitive. Resident psychic medium,” I chuckled, making a joke at my own expense.
I swore I heard her smile over the phone line. I could picture my sister in my mind. Same long unruly dirty blond hair as mine. Same startling blue eyes that could turn gray with mood, weather or depending on what color we wore. But we weren’t identical, we were fraternal. She was shorter and curvier than me, her nose just a bit sharper. And her tongue.
“Juliet, let’s face it, any place is going to be off to you, right? Any place you go is going to be steeped in someone else’s emotions and past, yes?”
“Yes,” I agreed, wiping my hands on my shirttails and leaning against the giant butcher block island in the center of the room. “True story.”
“Well, then, just deal with it. There is no clean space for you, really. Unless you build a brand new home from scratch and not a single worker has a bad day or an illness or any of that.”
I nodded even though she couldn’t see me. She was right.
“So take this new home and treat it as your own. Smear your own energy all over the place.”
I snorted, eyeing my shirt. It had been Justin’s. My heart crimped up at seeing it. Three years had not dulled my loss, and despite being psychically sensitive and talking to spirits more often than not, I had yet to see or talk to him. I wondered if it were somehow taboo for us to speak or if he thought it would be too painful for me to see him.
“Hello?” my sister sighed.
“Sorry, I hear you. You’re right. Though I don’t know about smearing my energy all over the place. Kind of makes me sound like a monkey—”
“Juliet!” she snapped, knowing where I was going with that analogy. “Onto other things. How are you doing? I mean…how are you doing?”
She meant moving out of the former home that Justin and I had shared before he died. She meant on my own. She meant finally embracing the fact that I was single and maybe moving on with my new life. Montgomery House was that chance. I mean, how often do you get to buy a house with a name? And I’d gotten it for a song. Which worried me, but…
“I’m fine,” I lied. “No worries.”
“I’m coming to see you soon,” she threatened, and I smiled.
“You’d better.”

He was big—big and looming. But he was also thin. The kind of build that made the mind pull up images of a praying mantis or some ungodly sea creature trapped in the darkness near the ocean floor. Just seeing him turn his muddy eyes to me made my heart thunder.
“You’re here,” he said and smiled.
The smile was the most frightening aspect of his appearance. It twisted his face in such a way that it reminded me of a molded rubber mask that had gone askew. Almost as if his skin didn’t quite fit on his bones the right way.
I turned to run, and when I did, his long arm shot out to plant a big, strong hand on my shoulder. Being touched by him was like experiencing the most sudden and all-consuming emptiness imaginable. A sob ripped out of me.
“I thought three was my lucky number,” he said, his voice gravel turned under a tire. Sand scraped across stainless steel. It made my head hurt, and my heart followed suit.
I pulled against his strength, knowing I’d never break free until I awoke. I knew by the energy I was trapped in a dream. Knew he couldn’t really hurt me…not yet. But I also knew that as long as I slept, I was his. This was the secret my new house held. This energy. And this was where I’d be until I could drag myself back up to my conscious mind.
“Three what?” I managed, stalling.
“Three girls before you came.” The cadence of his words stirred goose bumps along my skin. The fine hairs of my scalp prickled with dread.
“You killed them?”
“I consumed them,” he said. “Their essence.”
The urge to scream was overpowering. The urge to weep even stronger. Instead, I did the only thing I could do. I turned into his grip to face him. He looked surprised for a moment, his long rubbery face and his sick brown eyes showing shock. But then he smiled, and that hole seemed to open in my stomach again. I studied the face. The old-fashioned brown suit. The proper white buttoned-down shirt. Cufflinks, a tie clip, wingtip shoes and close-cropped hair.
Then I bit my tongue as hard as I possibly could and tasted blood. His face lit up when the coppery taste flooded my mouth. Maybe he could smell it. But then he realized what I’d done and frowned at me.
“You’ll be back,” he said. “I’m here all the time.”
I woke up.

Email ThisBlogThis!Share to TwitterShare to FacebookShare to Pinterest
Labels: Lily Harlem, Sommer Marsden, Under My Skin