The Tutor by Kd Grace - OUT NOW

Please welcome Kd Grace to my blog today with her brilliant new novel The Tutor, and she's chatting about intimacy. 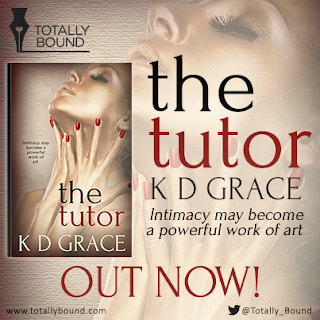 What Exactly is Intimacy

If two people who are attracted to each other can’t actually touch, can they still find a way to be intimate? What exactly is intimacy, and is it really dependent on being able to touch each other? I wanted to explore the elements of intimacy in my novel, The Tutor. I’m blessed to live in a very intimate relationship with lots of touching, but what would that intimacy look like if my husband and I could no longer have physical contact? How much of what binds us to someone and what makes us close depends on being able to physically touch? Lex Valentine and Kelly Blake must find their way to each other without touch. Can they do it?

Struggling writer, Kelly Blake has a secret life as a sex tutor. Celebrated sculptor and recluse, Alexander ‘Lex’ Valentine, can’t stand to be touched. When he seeks out Kelly’s advice incognito, the results are too hot to handle. When Kelly terminates their sessions due to what she considers her unprofessional behavior, Lex takes a huge risk, revealing his identity to her at a gala exhibition, his first ever public appearance. When Kelly helps the severely haphephobic Lex escape the grope of reporters and paparazzi, rumors fly that the two are engaged, rumors encouraged by well-meaning friends and colleagues.

The press feeding frenzy forces Kelly into hiding at Lex’s mansion where he convinces her to be his private tutor just until the press loses interest, and she can go back home. They discover quickly that touch is not essential for sizzling, pulse-pounding intimacy. But intimacy must survive the secrets uncovered as their sessions become more and more personal. 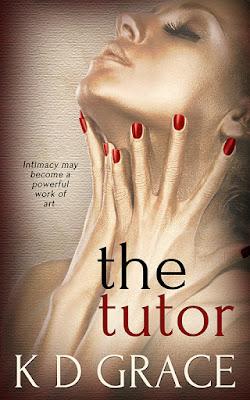 For a long moment they sat in silence again, both wrapped in matching terry robes, both looking slightly worse for the wear. He was okay with that. He could have sat there with her all night, but she broke the spell. “Lex, you’re exhausted. Do you think you could try to get some more sleep?”
“Stay with me.” The words were out before he could stop them. “If you stay with me, I can sleep.”
She stood and looked back at his bed and, for a dreadful moment, he though she was going to say no. “All right then, but your bed’s a train wreck. Why don’t you come to mine? It’s virtually undreamed in tonight. Besides I only allow good dreams in my bed.” She nodded to the open French doors and gave him an encouraging smile.
Back in the Meadowlark Suite she went to work on their sleeping arrangements, putting a barrier of pillows down the middle between them. It was a huge bed, just like his, so there was still lots of room. “There are enough cushions and pillows and throws for a herd of elephants to have a slumber party,” she said. “I don’t move much when I sleep, but this will make sure that I don’t accidentally touch you or you me.” She pulled back the covers and nodded to the space. “Get comfy and I’ll tuck you in.” He did as she asked, wishing desperately that they could lose the pillow barrier and he could take her in his arms and hold her all night and wake up with her still pressed against him. The thought made his chest ache with longing, but that she was here, that she was next to him, sleeping close, that would do. That was so much better than anything he’s ever been able to imagine for himself.
When she was settled in on the other side of the pillow barrier, he couldn’t keep from smiling. She was in his bed, well technically it was his bed, wasn’t it? She wore his engagement ring, and she did! She still wore it. She hadn’t taken it off. At least for the moment he could almost imagine the two of them as a normal couple climbing into their bed together after a hard day, lying close to each other before they both drifted off to sleep. What must that feel like? Would he ever know? If he ever did, at this moment he couldn’t imagine anyone he’d rather share his bed with than Kelly Blake. And just before he drifted off to sleep, he remembered that she had found him, she had followed him and come searching for him, both the other night in the sculpture garden and tonight. She had rescued him from the dream world and she hadn’t been repulsed by his neediness. She had stayed with him. When she’s not writing, K D is veg gardening. When she’s not gardening, she’s walking. She walks her stories, and she’s serious about it. She and her husband have walked Coast to Coast across England, along with several other long-distance routes. For her, inspiration is directly proportionate to how quickly she wears out a pair of walking boots. She loves mythology. She enjoys spending time in the gym – right now she’s having a mad affair with a pair of kettle bells. She loves to read, watch birds and do anything that gets her outdoors.