Welcome to My Sexy Saturday, this week we're chatting about our thoughts when with a loved one. My few lines are taken from my story IN SAFE HANDS which features in SEXY JUST GOT RICH, a Brit Babes anthology due for release on the 10th of February - but available for pre-order. 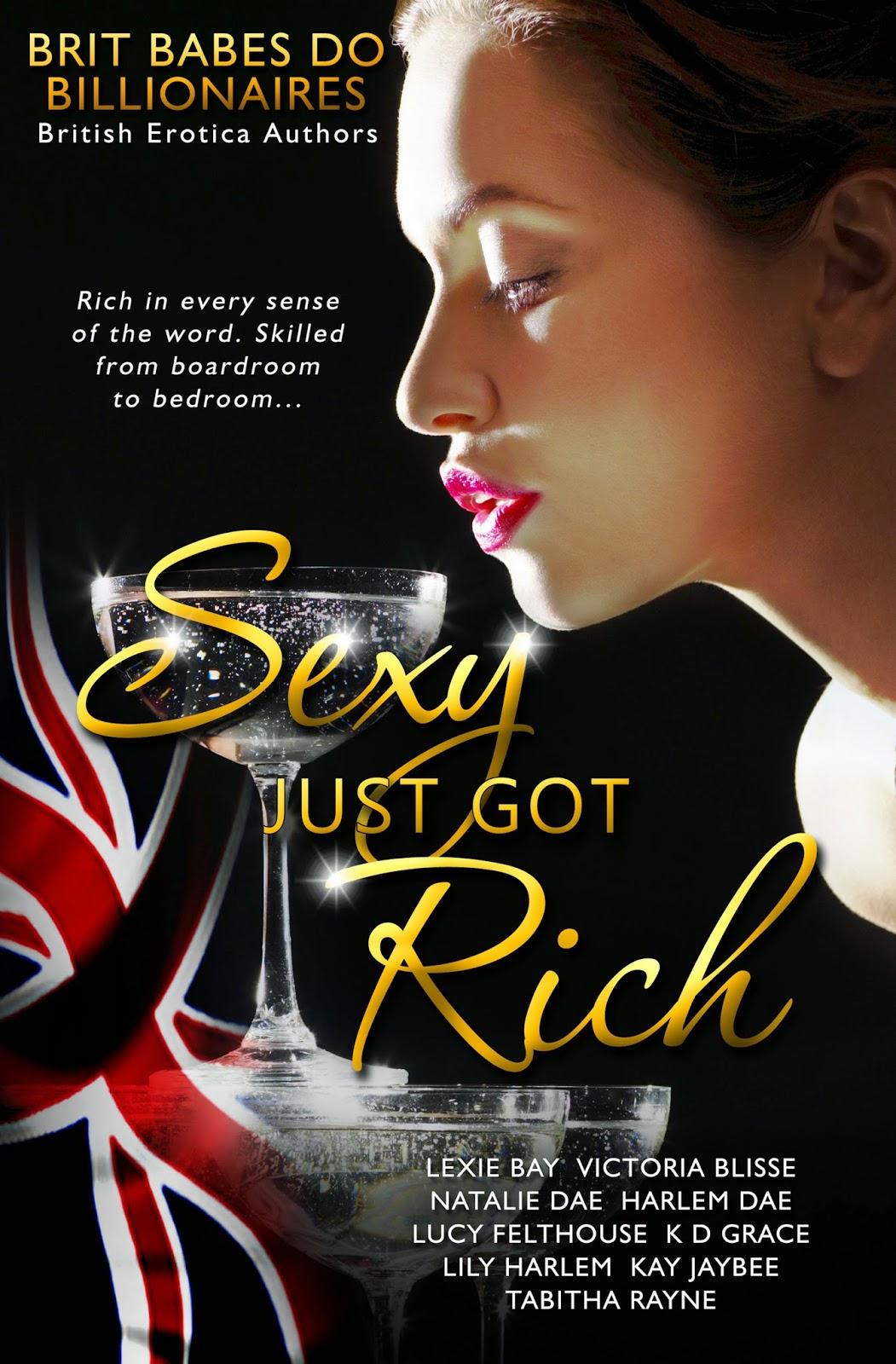 Here's the line up…

Kay Jaybee—Words of the Marquis 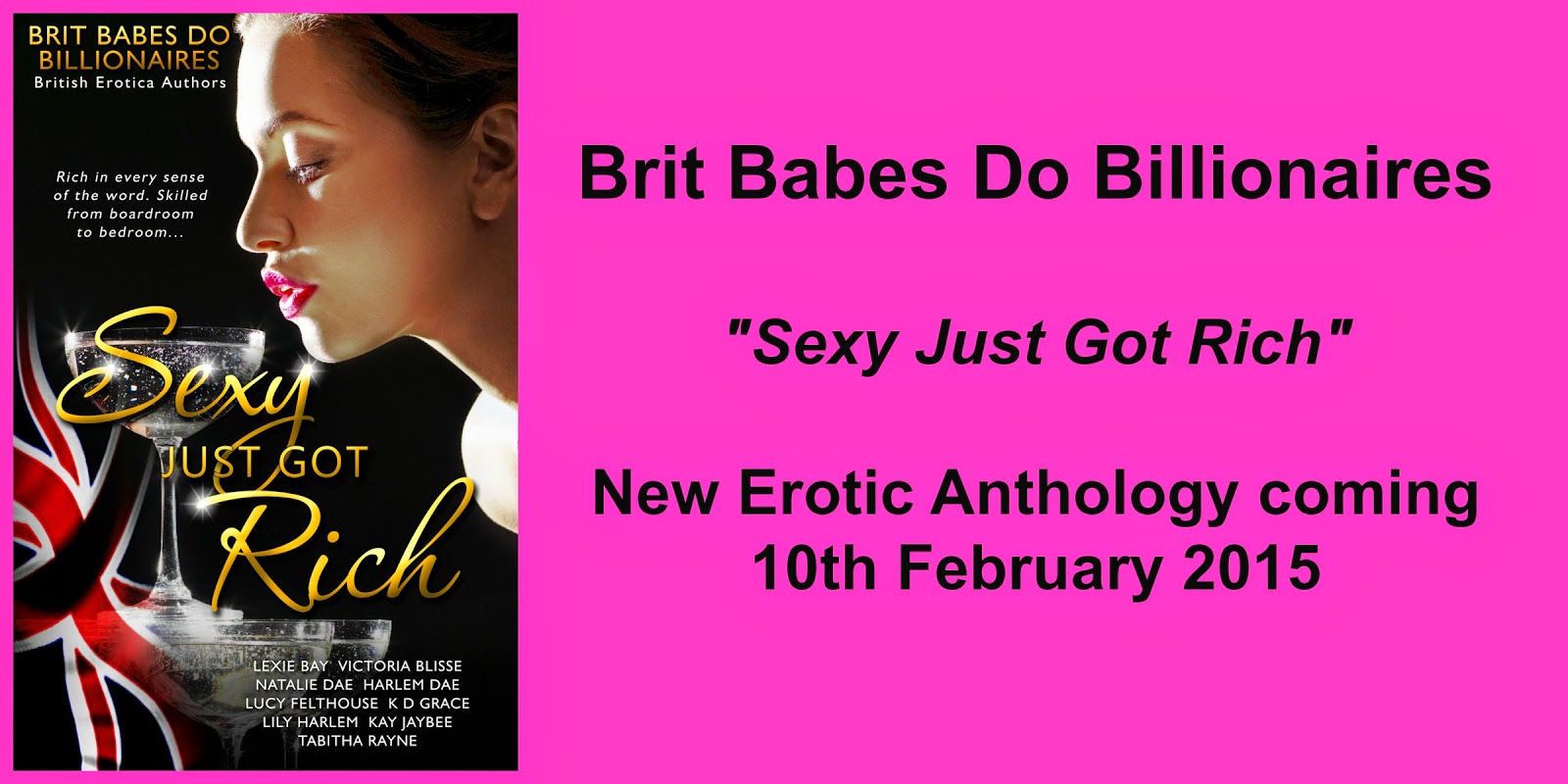 Excerpt from In Safe Hands (A spin-off from In Expert Hands which is due for release on 13th February).

Marie stared at the bright red stilettos she wore. She crossed her legs and bounced the toe of the right shoe in a sharp jig towards the huge window. Outside, the sun was slipping from its lofty position, its light touching the top of a tall building and spreading shards of hot-gold and fire-orange over the skyscraper windows.
She wriggled. The cool leather of the brown chair was soft against the skin on her shoulders, back and legs. She curled her hands around the ends of the arms and tapped her fingers.
Soon he’d be here.
Soon the door would open and shut with a soft click and the sounds of his shoes clicking across the hallway would make her heart trip and her nipples spike at her new bra.
She uncrossed and crossed her legs. Checked the lace at the front of her new panties to ensure it was smooth. It was. Of course it was. She’d carefully shaved her pussy for this occasion. He’d mentioned last week that he liked hairless, so she’d thought it would be an extra treat for his birthday. As it happened, it was quite a treat for her too—it felt wonderful.
She licked her lips and wondered if she should nip to the bathroom and apply another squirt of perfume. Maybe add another sheen of lip gloss too. But what if he arrived as she was doing it? That would spoil the moment. She wanted to be sitting in the spanking chair, staring out, when he got home. It was the way she’d imagined it. The way she’d fantasised about it.
The wail of a siren, many storeys below, filtered up to the apartment. As it faded, Marie heard the door click once, then twice.
He was here.
She swallowed. Her belly tightened. She clenched her internal muscles.
His keys rattled in the ceramic bowl against hers.
His shoes clacked in a slow, controlled way across the oak flooring. Rhythmic and steady, he came closer and closer still.
Marie held her breath. Hoped the red wasn’t a mistake. He did like red, didn’t he? She hadn’t pushed further than she should, had she? No. They’d done all sorts of kinky things together. Him arriving home and finding her in his chair wearing only underwear was tame in comparison.
She sensed he’d stopped right behind her.
He didn’t speak, but she could hear his breaths and smell his cologne.
“Happy birthday,” she said quietly.
“How did you know?” he asked.
God, his voice. The deep, sexy way he spoke, and that English accent to boot. It made her insides flutter and her thighs tense.
“It was on the calendar. In the kitchen.”
“Ahh, I see.”
“I got you something.” She pushed up from the chair, her knees a little weak and her stomach doing somersaults. It was always that way when she saw him for the first time on a Friday, but this, the underwear, his birthday…
She turned to face him, holding her belly in and puffing up her chest. He adored her curves and full round breasts, he’d told her often enough. “I’m afraid it won’t take much unwrapping.” She smiled and tried to look more confident than she felt.
He surveyed her and the right side of his mouth twitched into a half smile. “What if I’d brought clients back?”
“You never have before.” She placed her hand on her waist and cocked her hips.
He shot out his tongue and swiped it over his bottom lip. He was trying to look cool, unmoved by her standing there like that, but Marie knew if she cupped his groin his cock would be hard and straining at his suit pants.
He took a step back and took off his suit jacket, revealing a pristine white shirt. After tossing the jacket to one side, he undid the cuffs on the shirt. Very slowly, agonisingly slowly, he rolled them up, each one receiving three precise turns.
Marie stared at his strong forearms and wide, hair-coated wrists. She studied the way his slim navy tie moved just a little with his actions.
He pointed at the sofa. “Over there. Now.”