Smut by the Sea Volume 2, Edited by Victoria Blisse and Lucy Felthouse 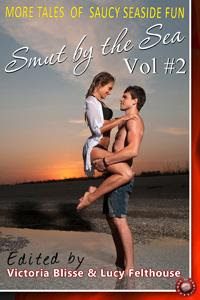 From the sun soaked beaches of Brazil to the altogether cooler coastal towns of England, Smut by the Sea Volume 2 has it all. Whatever your interpretation of naughty seaside fun, there’s something nestling between the covers for you. Amusement arcades, beach houses, mermaids, honeymooners, shipwrecks, sex toys and more abound in this exciting collection of stories from erotica’s finest authors.

Amazon UK  Amazon US  ARe

Coming Soon to All Other Good eBook Retailers.

Brigit loved the seaside. She always had, probably because visiting it was a rarity. Living in the centre of England meant that even the nearest seaside town was over an hour and a half away—and the nice resorts even further.
Which was why her boyfriend, Allen, proposed a long weekend in Brighton. He knew how fond she was of the seaside. Unsurprisingly, she agreed delightedly.
“It’s a long way,” she said. “But it doesn’t matter. We’d never go anywhere if we lamented the length of the journey.”
As it happened, the travelling wasn’t too bad. Miraculously the M1 was clear all the way down to the M25—and even that notorious motorway wasn’t experiencing its usual havoc. A straight shot south on the M23, then the A23 took them towards Brighton, and they navigated the one-way systems and lack of road signs and—eventually—found their hotel.
“Wow,” Brigit said, stretching luxuriously after getting out of the car, “that didn’t take as long as I thought. Shall we check in, dump our bags and go and explore?”
“Sounds like a plan to me,” Allen replied with a grin.
They slammed their respective car doors, grabbed the bags from the boot and headed into the hotel. Fifteen minutes later, after using the toilet and freshening up, they were back outside.
“Nice choice of hotel, babe. I like it,” Brigit said.
“I’m glad. I researched it well,” Allen replied.
“The bed looks nice and comfy.”
“Well, I’m sure we’ll be able to give it a decent road test later.” He winked at her, and got a slap on the arm for his trouble.
“You’ve got a one-track mind, you have.”
“Well, what do you expect when I’ve got a girlfriend that looks like you?”
She giggled. “Charmer.”
“That’s me. Okay, now I’m back in good books,” Allen said, “what do you want to do? Now, I mean. Not at bedtime.” He waggled his eyebrows.
Brigit stuck her tongue out at him before replying. “I dunno. Just look around I guess. Get our bearings. See what there is to do around here.”
They walked hand-in-hand towards the seafront, then along it in the direction of the pier. They passed the burnt out shell of the West Pier, and Brigit wondered aloud whether it would ever be rebuilt or demolished. Or would the blackened skeleton be left there forevermore, a reminder of what once was.
Soon, they drew close to Brighton Pier. Brigit turned to Allen with a grin.
“What?” he said, then followed her almost manic gaze down the length of the pier, towards a building with fake turret-type things and some very real flags. He sighed. He couldn’t be sure from here, but he thought it was bound to be the amusement arcade. “Oh, you want to go in there, do you? I wonder why?” His voice was laden with sarcasm in his last sentence.
“You know damn well why. Come on!” Brigit tugged him along the last few metres of the pavement and onto the wooden slats of the pier. “Ooh, we can have fish and chips when we come out, if you want.” 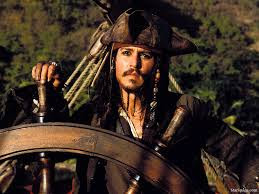 Can't get enough of Smut by the Sea, check out Volume One - I have a sexy pirate story nestled within these saucy pages called Swashbuckling and features a delicious Cpt Jack Sparrow type who has collected some very naughty toys on his travels to the four corners of the world! 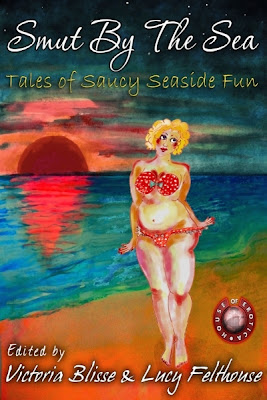 Amazon UK  Amazon US
Posted by Lily Harlem at 08:19