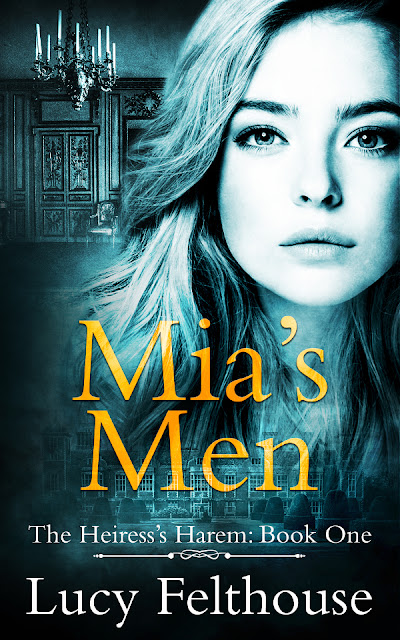 The Heiress’s Harem: Book One

Mia Harrington’s father just lost his brave battle with cancer. Naturally, she’s devastated. With her mother long-since dead, and no siblings, Mia has a great deal of responsibility to shoulder. She’s also the sole beneficiary of her father’s estate. Or so she thinks.

Unbeknownst to Mia, her father made a change to his will. She can still inherit, but only if she marries a suitable man within twelve months. If she doesn’t, her vile cousin will get everything. Determined not to lose her beloved childhood home, she resolves to find someone that fits the bill. What she isn’t expecting, however, is for that someone to be into sharing women with his best friend. In the meantime, Mia’s friendship with the estate gardener has blossomed into so much more.

She can’t possibly plan to marry one man, while also being involved with two others …or can she?

Mia's Men is the first novel in a new reverse harem series by Lucy Felthouse. I've read a lot of stories in this genre lately (and written a few!) as it's just so cool for the heroine to literally have her cake and eat it when it comes to hot guys. What's not to love about that?

Mia's Men is hot and sexy, it's for mature readers and certainly sets the scene well for the series going forward. I adored the Englishness of the characters I got to know in this first book, the stately scenery, and the British dialogue (I read a lot of US work so it's nice to come home on occasion).

The guys we meet are super sexy, very different, and they all have particular tastes, kinks and desires when it come to bedroom fun. There's also a really nice bit of tension as Mia begins to juggle her emotions and theirs. Having several boyfriends is never going to be easy, even if it is a lot of fun.

I give Mia's Men 5 * because it's well written, a clever plot line, it's a nice platform for Mia to build her harem from and it's left me wanting more....roll on book 2!