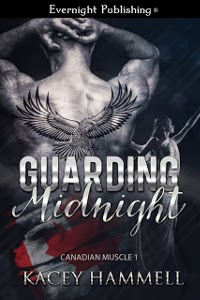 Thanks for having me today, Lily, on this last day of the Guarding Midnight Tour.

Buck ass naked and glorious, his body sculpted so fine and beautifully, she wanted to jump him all over again.

Good God almighty. He was going to hell. She was his one-way ticket there.

What a waste of clothing. This was one man that all women should get to see walk around as free as the day he was born.

“Don’t try to get me all worked up, not when you’ve been an ass by ordering me around. And you’re still angry.”
“Yes, I am.” He nodded and moved around the end of the bed. “Ever had angry sex?”
Shree gasped. “What are you talking about?”
He shrugged and smoothed her hair back. “Never heard of angry sex then?”
She shoved at the boulders he had for shoulders. “I’m not having sex with you right now. Forget it. Besides, what the hell is angry sex? I don’t like it rough, if that’s what you mean.” Taking a step back, she glared at him when he followed.
“I figured it’d be a nicer and more polite way to tell you I wanted you, now—right now—rather than come out and simply say I want to fuck the shit out of you.”

She glanced to the right.
Men came in all shapes and sizes with various builds, physiques, and widths, and she understood that. But this man, whom she was sure could barely fit through the doorway, was one unlike anything she’d ever seen before.
Tall, at least six-six. Herculean shoulders, biceps that the short sleeves of his white t-shirt had no hope of getting over, and hard thighs that were easy to determine even beneath the sweats he wore, which probably got their workout from just carrying this man around every day. Hell, even her long arms wouldn’t be able to get around his midsection.
Damn if she didn’t want to try, though.
But it was her most favorite feature on a man that captured her attention completely.
His head—bald, tanned—she had a weakness for his kind. To her there was a wildness, a stronger soul to a man who kept things clean and crisp.

“This is a book that will consume you. From that sensual first kiss through terrifying suspense filled moments, Hammell's writing will pull you in.” ~ 5 Stars from S.J. Maylee, author of the Love Projects Series

“…doesn’t disappoint…characters, plot and storyline was amazing, overall this was an easy contemporary romance that will have some enjoying on how the story unfolds.” ~ 5 Stars from Beckey, In the Pages of a Good Book

“… an amazing book…background story was amazing and the main character and background characters, I fell in love with them right away. I couldn't put this book down.” ~ 5 Stars from Stephanie, Goodreads

No one knows sacrifice better than former Army Sergeant Gavin Bennett. He’s witnessed firsthand the emotional, physical and mental toll of being caught in the crossfire. Being a bouncer-slash-bodyguard may not be Gavin’s dream job, but he’s willing to do just about anything to help out family. When Gavin reports for his first day of work, he quickly discovers a woman who threatens to crack his legendary cool.

Shree Walker is on the run from a dark past she tried to shut away. Battered and broken, a happily ever after doesn’t exist for her. Ready to start fresh with a new life in a new city, she is happy dancing at the Vixen Club. She’d be even happier without the presence of the prickly new bouncer who won’t let anyone or anything get past his carefully guarded defenses. He’s a distraction she doesn’t need. And a temptation she can’t resist.

When Shree is kidnapped by the criminal mastermind hell-bent on taking the club at any cost, Gavin has to make a decision. Hold tight and continue to keep Shree at arm’s length. Or break down his walls and take a chance on something more powerful than them both: Love.

Book Trailer Credits to: Beckey at In the Pages of a Good Book

A mom of three, Kacey has made certain each of her children know the value of the written word and the adventures they could escape on by becoming book-a-holics in their own right. She lives her own happily ever after with her perfect hero in Ontario, Canada, and is a true romantic at heart.