Welcome to Sunday Snog. This week a smooch from my new novel Muscling In. 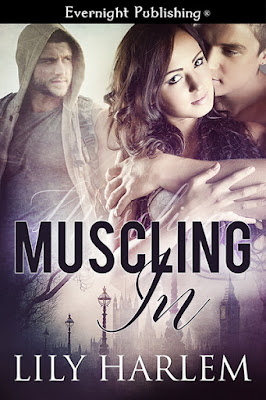 My husband has a secret. Desires he’s kept locked away in a deep, dark place.

Determined to pry details of this forbidden longing, I had no idea how much this new side of him would turn me on. So when I met the object of his lust I couldn’t let it rest.

Edward Moorland was a force to be reckoned with, a man who fought for his country and what he wanted. But did he want me and my husband? Would I ever experience his passion let loose or would I remain on the sidelines, watching, waiting, hoping?

One thing I knew, I wasn’t the type of girl to give in without a fight. I wanted to be part of the action too. More than part of it, I wanted to be in the goddamn middle of it with bells, whistles and fireworks when it all exploded. Yes…I wanted it all. 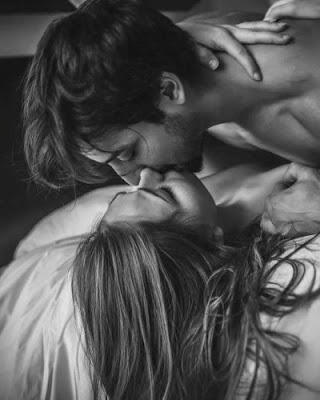 I stepped up to him, rested my buttocks on the table and stared down at the top of his head. His hair was getting ready for a trim. “And surely it’s good to be busy.”
“Yes, it is good to have the business. Just means my mind is…”
“What?”
“All over the place.” He shoved his hand through his hair. “It’s just all over the place.”
I flattened down several strands he’d left sticking up. “But you’ll cope. You’ve got systems organized, a good team.” Damn it. I hated seeing work get to him like this.
“I know.”
“And you have to remember this is down time. The evenings and weekends are not work time. It’s you time…” I slipped my hand down his temple and stroked my finger over his bristly cheek. “Us time.”
“Us time.” He looked up at me. His eyeline dropped to the small pink vest top I was wearing and the line of my cleavage. His pupils dilated a little and he pushed his beer to one side, the base of the bottle scraping on the surface of the wood.
My belly clenched. I knew that look well enough. It didn’t usually happen quite so fast but I wasn’t about to complain. I cupped his chin and he stood, fast, the chair grating on the floor tiles.
“Sian,” he said, gripping the back of my neck with one hand, his fingers tightening in my hair. “Fuck.”
“Okay.” I grinned and slid my hand down the column of his neck to the undone collar of his white shirt.
He loomed over me and pressed close.
I could feel his body heat blasting onto my skin and smell his faded cologne. He was breathing fast.
His mouth caught mine. He cradled the back of my skull. His tongue was insistent and urgent.
Lust shot through my body and I clung to his shoulders. I was whisked into the moment and into his desire.
“Up,” he murmured, hoisting me onto the table as he’d spoken. He stepped between my legs, bunching my short skirt up around my thighs. “I need you. Now.”
“Yes, now.” I reached for the button on his trousers, released it and his zipper. God, he was so hot. Like this, in his work clothes, smart and business-like yet overcome with longing…for me. His cock was straining against the material of his boxers.
He shoved my skirt up around my waist and yanked my knickers down. I kicked my left leg and he helped them slip so they dangled from my foot.
“I’m so hard for you. Feel.” He pushed his trousers to his thighs, reached for my hand and pressed it over his boxer-clad dick.
I gave it a firm squeeze.
“So you are, soldier.” I grinned, eager to get him buried deep.
He groaned and pressed me back onto the table. The pine was cool on my butt, and his body was so hot over me. I hooked my legs around his hips and slid my hand up the inside of his shirt, spreading my fingers on the warm skin of his back.
“Give me your pussy,” he said, pushing his boxers away, then aiming his cock at my entrance.
“It’s yours. Take it.” I tilted my hips, braced, preparing for his thrust. I had a feeling it wasn’t going to be a slow ride.
“Are you wet?” he asked, his cockhead parting my first folds and easing in.
“For you.” My pussy was quivering, my clit swelling. “Give it to me.”
He slid a hand beneath the arch of my spine and gripped me. The other held the back of my head. I was pinned to him. He kissed me with a ravenous hunger I hadn’t known before and pushed in.
I tensed, held my breath, struggled to be involved in the kiss as he shoved balls deep. The dense filling, the stitch of discomfort and the absolute passion behind his force was mind-blowing.
Almost immediately he withdrew, barged in again, his balls slapping up against my ass.
I crossed my ankles at the base of his back and hung on to him. He seemed so lost in me, so consumed.
He set up a wild pace, not letting me shift as he plundered on and on. His need for me, his almost violent want, was hugely erotic. He was grunting, groaning, and his dick, so thick and hungry, dragged deliciously over my G-spot.
“Oh, God,” I gasped, breaking the kiss. His body was rubbing against my clit. “I’m going to…” It was building. The pressure of an orgasm growing.
“Yes. Come on my dick. My dick that’s just for you now…hard just for you now.”
“Now, yes now, forever.” I shut my eyes, the fire inside me raging with need for release.
“I fucking love your pussy,” he said, his voice strained. He too was close. “I fucking love my cock in cunt.”
“Coben…” I gasped. Orgasm swept through me as his words echoed in my ears.
His thrusts grew even wilder. The kitchen table creaked. He squeezed me closer still, trapping me to him.
“Ahhh…” He came, spurting into me. “Ahhh, yeah, fucking hell…”
My pussy contracted around him. Blissful spasms of release and tingles of pleasure swept through my body.
“You’re so perfect,” he murmured against my ear, his breaths loud and hot.
“Ditto,” I said, opening my eyes and staring at the white ceiling. My chest was heaving against his as I tried to catch my breath.
“I don’t want anything to change us.” He raised his head and looked down at me.
“Why would it?” I pushed my hands through his hair and relaxed my toes, which had curled without me realizing.
He frowned slightly. “Just that…”
“What?”
“You know, since we’ve been together I’ve been so happy. I don’t want that to change.”
“Me too. Happy, that is. And it won’t change.” I swept my lips over his. “Why would it?”

Grab your copy from Amazon, Amazon UK, Evernight Publishing, ARe

Email ThisBlogThis!Share to TwitterShare to FacebookShare to Pinterest
Labels: muscling in