Welcome to Sunday Snog, here's a smooch from my new menage a trois novel Muscling In. 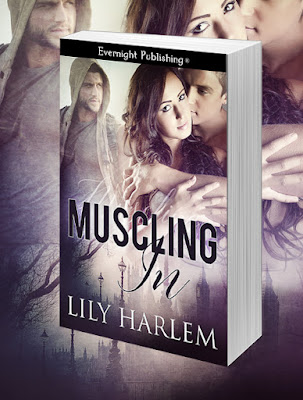 My husband has a secret. Desires he’s kept locked away in a deep, dark place.

Determined to pry details of this forbidden longing, I had no idea how much this new side of him would turn me on. So when I met the object of his lust I couldn’t let it rest.

Edward Mooreland was a force to be reckoned with, a man who fought for his country and what he wanted. But did he want me and my husband? Would I ever experience his passion let loose or would I remain on the sidelines, watching, waiting, hoping?

One thing I knew, I wasn’t the type of girl to give in without a fight. I wanted to be part of the action too. More than part of it, I wanted to be in the goddamn middle of it with bells, whistles and fireworks when it all exploded. Yes…I wanted it all. 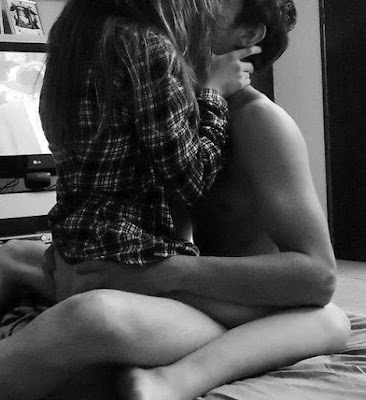 “Fucking hell you’re a sight for sore eyes,” he said, slipping his hand into my hair, his palm scraping over my ear.
“Ed...” I said breathily.
“So fucking beautiful. Coben’s a lucky guy to have you.”
“You can have me too.”
He mashed his lips together. A small tendon jumped in his
cheek, beneath the bruising there.
My heart galloped and my stomach lurched in anticipation of
what I was about to ask. “If you want me, that is.”
He pulled my face to his and hovered his lips over mine. “Did
you ever doubt that?”
“Yes.”
“You shouldn’t have.”
He kissed me in a hot, hard way that sent white-hot need racing through my veins. The sweetcorn fell to the floor as he wound his arm around my waist and tugged me closer. His hold on me was vice-tight, his strength evident in every muscle beneath my palms.
I straddled his legs and he urged me to sit on his thighs. Our heads now level, the kiss deepened. Our tongues tangled, our breaths quickened. I wanted him. I wanted Ed in my pussy, fucking me. The way he’d fucked Coben with determination and desperation, I wanted that too. And damn the guy deserved it after what he’d been through.
He fisted the hair on my crown and tugged.
I was forced to tip my head back and as I stared at the ceiling he kissed and nibbled his way down my neck.
“Oh God,” I moaned. Each section of skin he’d touched felt so alive. I rocked forward and felt the bulge of his erection forcing itself on his leathers.
“Ah yeah,” he moaned. “I’m going to make you come so hard.” He slipped his hand up the inside of my top and cupped my right breast.
“More.” I pushed my crotch over his, feeling the thickness of his shaft even through our clothing.
“Much more.” He squeezed my breast over my bra, gathering up all the flesh and the cup.
I squirmed in exquisite discomfort.
He released the tight hold on my hair and I looked at him again.
His lips were damp and slightly parted and there was a flush on his cheeks. “You’re the perfect woman,” he murmured. “Hot and sexy, yet gentle and kind. I want you. I want all of you.”
“And I want you.” I cupped his cheeks and held his face.
A sudden bolt of realization hit me. We couldn’t do this. Not without Coben. It wasn’t fair. I belonged to him. I was his wife. And although he was looking forward to the threesome fantasy and had been fucked by Ed it was something we all needed to do together.
“Coben,” I managed.
“Yeah, he’ll be home soon right.” He leaned in for another kiss.
“Yes, but...”
“Oh fuck, there’s a but?” He stilled.

Grab your copy of Muscling In from Evernight, Amazon, Amazon UK, ARe and all other good ebook retailers.