Welcome to Saturday Spankings! Time for some Viking fun with SHARED BY THE VIKINGS... 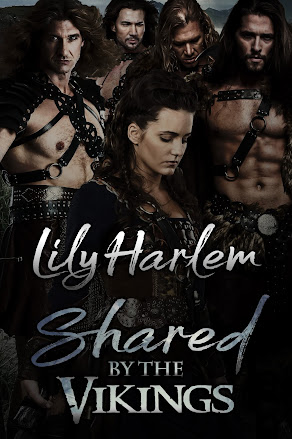 “And I’d say a good red ass might remind this new woman of ours not to lie again.” Gunnvar’s voice was every bit as low and rough as Erik’s had been.
Ingrid glanced at him. His eyes reflected the flames and he sat forward, elbows on his knees, hands dangling between them as if eager for the show to start.The show of her having her bottom reddened. “You can’t do this to me. My father will have your entrails. Leave me be.”
“King Baardsen isn’t here.” Quick as a flash Erik whipped out his arm, encircled her waist, and dragged her over his knee.
Suddenly Ingrid’s world turned upside down. She flailed for purchase, managing to grab his leg with one hand and bury her fingers in the sand with the other. His thick pants were coarse on her naked flesh, scratching over her stomach. “Get off me!”
“Keep still, woman, you’ll only make this harder on yourself.” He clamped one hand over her back, while trapping her legs with the other. Ensnaring her to him with all the strength of a wolf’s jaw.
He shifted his knees and she dipped further forward, letting out a gasp as she realized her rump was now the highest part of her body and was offered up and vulnerable. “Erik! I swear I will have you—”
“What? You’ll have me what.” He dragged her closer, so the side of her body molded up against his belly.
“I’ll have you... I’ll have you.” The blood had rushed to her head. Her scalp wound throbbed. She writhed and bucked.
“I mean it. Be still or I’ll have you spanked every day we are here. And Tali and Gunnvar can each have a go at this pale ass. Let’s see how you like it then, three of us reddening your rump.”
“You wouldn’t dare...” She twisted and out of the corner of her eye she spotted Tali. Like Gunnvar he was leaning forward, anticipation etched on his face, his lips slightly parted.
They’d both spank me... happily. Tali and Gunnvar.
“You, I...!” She kicked up her heels, sending a spray of sand up to her ass. “Stop it.”
Whack!
A resounding slap landed across both her buttocks.
She yelped and jerked, trying to get away from the pain searing over her skin. But she could go nowhere. Erik had her trapped against him.
“Sweet little ass,” Gunnvar said then chuckled. “Cute when it wobbles.”
Humiliation swarmed over her. She knew what she’d done was wrong, disgraceful even but this... to be spanked over the knee of Jarl Erik with two of the crew watching on... watching on and enjoying her disgrace.
Another biting spank landed on her ass. Again she jolted forward, her body seeming of its own volition trying to escape the punishment.
Her ass was heating, reddening, but so was her face. Warmth bloomed there as she imagined what she looked like to the other two Vikings. Placed over Erik’s lap like a naughty child, and his hand coming down on her. She didn’t know what was worse, to be slapped or to be watched.
Another slap, then another.
She cried out and struggled to no avail.
“Be still.” Erik’s voice was gruff and commanding.
Also his palm was shockingly large, and it came down with breathtaking force and precision. The speed of it took her breath away, the sound of flesh on flesh screamed through her ears.
She bucked and fought, then found her face against his calf. She opened her mouth and sank her teeth through the material. She tasted suede and the salt of the ocean, also a satisfying wedge of hard flesh.
“Ah, wench!” He grabbed her hair and yanked her head up. “No more biting.”
“No!” she cried, staring wide-eyed at the shelter. “No more spanking.”
“I will say when I stop. And you just earned yourself more of this.” He thwacked the flat of his palm down; before the pain had bloomed, another searing slap landed over the last. On and on he went.
She cried out, her voice toppling into the forest. Tears of shame streaked from her eyes, flicking this way and that as she twisted her head within his grip on her hair.
Indignation roared through her. How dare Erik do this? She was treasured in Ravndal, the daughter of a powerful king. Food and wine brought to her. A servant to plait her hair and wash her clothes. Yet here she was, upended and being soundly spanked like an urchin child caught stealing apples.
“She’s a feisty one,” Gunnvar commented.
“Ja,” Tali said, as though he were watching a fish struggling in a net. “She is giving you a challenge, Erik.”
Their words made Ingrid fight harder. She would challenge this monster who was striking her ass. But her struggling was futile. Although she put muscle and energy into escaping she could go nowhere. Erik had her well and truly ensnared. He was simply too strong, and there was too much muscle for her to escape from.
And he wasn’t letting up.

(SHARED BY THE VIKINGS IS ALSO ON KINDLE UNLIMITED)