RIDING WITH WARRIORS is coming very soon (25th of Sept) here a snippet to whet your appetite. 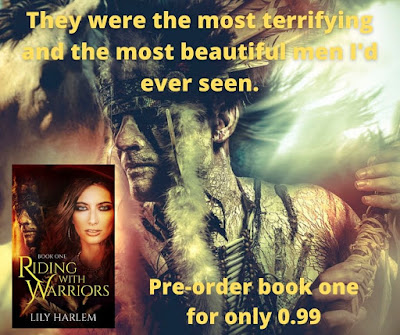 Once again, Alice followed Mahpee along the track.

Alice looked around warily. “Would a wolf attack a horse?”

“Not a wolf on its own. A pack in the winter, who are hungry, yes, they would.” He tapped the string of his bow that rested over his chest. “But do not fear. They are well-fed in the summer, and I have this. I will not let a wolf harm you, Brave Flower, or Faith.”

She nodded. “I believe you.”

He turned and continued north.

Alice studied his broad back, strong shoulders, and long sleek hair. Mahpee was a fine figure of a man, powerful and agile, big and strong. It was clear he was clever and skilled, too. He’d learned another language, her language, and seemed to know everything about the wilderness.

But when he left again…later…and she was all alone in the cabin, then what?

She tried to push that worry aside. Her mother had always told her to try to enjoy the moment. And right now, riding past a huge swathe of pink and white wildflowers with a blue-winged bird fluttering beside them, life seemed all right, more than all right. She was enjoying herself.

A sense of calm came over her. She was aware of Faith relaxing, too, as if she sensed the change in Alice’s previously tense body.

Alice smiled and patted her neck. Mahpee had been right, this was a good way to feel at one with a horse. Though what it would be like at a gallop, she had no idea. Well, it would be bumpy, she guessed that.

They came to a gap in the trees. A huge meadow stretched before them. An assortment of grasses swayed in the breeze, creating long silk scarves of shimmering movement.

“This is pretty,” she said, sensing they’d arrived.

“Ah, there is more.” Mahpee leaped from Ouray, landing softly. He reached for her waist and tugged her down.

She landed with a soft gasp, her hands wrapped around his hot, hard biceps. Fingertips resting over the thin leather bands circling his upper right arm.

“You will see,” he said with a grin, the corners of his eyes creasing. He didn’t have paint on his face today.

Alice had no idea what he meant. She did hope it wasn’t another bear she’d come to see, though, or a wolf or lion. Whatever it was, Mahpee was pleased with himself.

“This way.” He tugged her away from the horses who’d already dipped their heads to graze. “Go softly.”

He held her hand, his big fingers folded around hers. She often felt small standing next to men, but Mahpee even more so.

They waded into the knee-deep grass.

“You will see.” He held his other hand out, as if ready to catch something. “Like this.”

And then the meadow around them came to life. A fluttering burst of orange as a hundred butterflies, more, a thousand, rose into the air. Every step they took sent a new wave of the tiny insects upward in a magical dance, swirling and flickering. The air trembled with them in a quivering cloud.

“Wow.” She held out her hand and they flapped featherlight wings against her skin. “There’s so many.”

“Yes. I love it.” She gazed around, feasting her eyes on the sight. Her mother would have loved to see this. Alice hoped she was with her in spirit, somehow.

They walked farther, more butterflies rising into the blueness of the sky. “Where are they going?”

“They will return; this is their home, for now.”

“They will follow their own paths. The way we all must.”

Alice stopped. She’d never imagined to be on the path she’d found herself on.

“What is it?” Mahpee released her hand and put his palms on her shoulders.

She liked their weight and heat. “Thank you, for showing me this…and for being here.” She stared into his dark eyes. “It’s so very beautiful.”

His jaw tightened. “Not as beautiful as you are, Brave Flower.”

“You think I am beautiful?”

A strange swelling sensation filled her chest, and her eyes prickled. “Mahpee.”

“I said I would care for you, and I will.” He moved his hands from her shoulders up to her neck, his fingers catching in her hair. “I do not wish for you to ever get one scratch or bruise or moment of pain, hunger, or sorrow.”

His eyes flashed with such determination, such truth, that Alice could resist no longer.

She went up onto her tiptoes and pressed her lips to his. She closed her eyes, lost to the sensation of his closeness and his touch.

He slid one hand to the back of her skull and cradled her head possessively. His grip increased, and he hugged her closer, their bodies coming into alignment.

His warm tongue peeked in, searching for hers.

The kiss intensified, and her heart rate increased, sending heat over her entire body.

Somewhere she had the thought that Chochmi kissed better than white men, than Dan, but then it was gone and she could think only of Mahpee and being in his arms.

He pulled back. “Brave Flower?”

“In answer to your question yesterday, Mahpee.” She paused. “Yes, I think you are a very handsome warrior.”

He stroked the back of his index finger down her cheek then over her chin. “That pleases me.”

He nodded, and then his mouth was on hers again.

Alice fell into the kiss this time, sliding her hands around his warm shoulders and gliding over the wide expanse of smooth skin. She wanted to get closer to him. It was as if she couldn’t get close enough. Would she ever get enough of the new man in her life?

Their tongues tangled. He tilted his head, deepened the kiss, and groaned softly.

Alice moaned, too, absorbing every inch of his body that connected with hers—his solid chest, thick strong arms, and the bulge in his groin that butted up against her stomach.

She withdrew, breathing fast and shallow. Mahpee wanted her body. That much was clear. Would he just take it? Push her down to the meadow floor and drive his cock in? Would she want that?

He released her and adjusted the leather bands around his biceps. He didn’t bother hiding the wedge of flesh evident through his pants.

“We should go to the cabin,” she said.

“I am sorry. I didn’t mean to scare you.” His eyes narrowed. “I thought you wanted to kiss.”

She was silent as she looked around. The butterflies were thinning now.

“We have seen this beautiful sight, and thank you. I will never forget it.”

He nodded and stared at the ground, his mouth tugged into a downward curve.

“Mahpee.” She clasped his hand. She hated seeing him crestfallen, thinking he’d done something wrong. When in truth it was clear he was a kind and gentle soul.

She took a deep breath. “Will you stay with me tonight, Mahpee? At the cabin?”

He snapped his head up. “Stay?”

He nodded. Once. A quick up and down of his head.

“Does that mean you will?”

She turned his hand over and stroked the lines that mapped his palm. “I said that wrong, it is not just that I don’t want to be alone, I want you to be with me. I’d miss you if you left me now, Mahpee.” 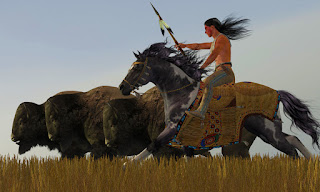 Pre-order the trilogy and be the first to meet Mahpee, Hinto and Yas.