Please welcome HK Carlton to my blog today, great to have you here and wow, what a fabulous cover Streetlight People has!... 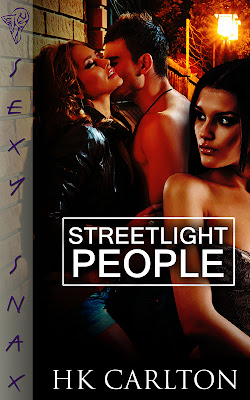 Thanks for having me, Lily!

I’m still a fairly new writer, well relatively new published writer that is, and Streetlight People is my first writing venture in the ménage genre. Here’s a quick tease. I hope you’ll check it out.

We all have hidden desires. Sometimes we conceal them, even from ourselves.

Andrea, your average college co-ed, has signed up for some extra courses at the local university, but so far the only thing that has sparked her interest is the sexy guy on campus with the tight-fitting jeans, muscle-hugging T-shirt and ever-present shabby cowboy boots. From their fiery exchange of awareness, the admiration is not completely one-sided.

After a miserable day at her part-time job and a few drinks, Andi takes a walk, only to find herself in the arms of her campus crush, Street. As the two get to know each other rather robustly against a storefront window, Street’s girlfriend appears and issues a deliciously steamy proposition.

After a frenzied night of satisfying experimentation, Andi sneaks out while her two companions sleep, escaping the particularly awkward morning after. But in the stark light of day, Andi has to admit that her feelings for Street are more than simple infatuation, and Toni isn’t a part of the new equation.

Could Andrea possibly hope Street might feel the same?

I looked up at him and my words died on my tongue. Oh, my God! It is him! The guy from school, and he was fucking gorgeous. I’d never been up close and personal with him when I’d checked him out, only noting his other sizeable attributes in his tight jeans and T-shirt. And he knew the exact moment that I realised that he was something else. The corner of his mouth drew up. Obviously he was used to this reaction from women. I should have found his arrogance a turn-off. But I didn’t.

“I don’t even know you.” But who wouldn’t want to?

He was tall, broad, with a hard body. His features were sculpted. Full lips, sharp cheekbones, sculpted chin complete with a slight cleft. His cheeks were covered in a fine layer of stubble, screaming danger. I couldn’t see what colour his eyes were, but they were alive with mischief and purpose.

“We can change that,” he said, tucking a strong hand under my hair, cupping my neck and the side of my jaw. Jesus! Was he going to kiss me? Like he’d kissed her?

“Wouldn’t you like to get to know me? I’ve seen you around campus. Don’t think I didn’t know you were scoping me out.” He continued to grin cockily. “And don’t think for one second I wasn’t doing the very same.”

Then his lips were on mine. I struggled for the briefest of seconds before I was overwhelmed with sensation. He kissed softly, teasing, tempting me with his lips and his tongue. The smell of him, the taste of him drew me into his web of seduction.

“Mmm,” he murmured, into my mouth. “What have you been drinking tonight, blonde one?”

“Mmm, my new favourite—spiced rum and you,” he whispered, and took over my mouth once again, but this time I was ready for him and I kissed him back.

His tongue touched mine then swept into my mouth. The next thing I knew, he had me plastered up against the glass window at the front of the store.

“Wow, you are one little ball of heat,” he said as his body closed in on mine, pressing his chest against my tingling tits. He dropped his hips and thrust forward, forcing me backwards until my ass hit the window. I realised he had a full-fledged hard-on directed squarely at me. My own lower half rushed to life at the contact. Tingling, sweet, wet heat rushed between my legs as I pressed my pelvis against his rock-hard cock. I think I even growled my own approval. I wanted to fuck this stranger. Right here. With my ass slapping against the cold glass. What the hell was wrong with me?

All of a sudden I heard another voice—a female one—to my right. “I told you she was pretty.”