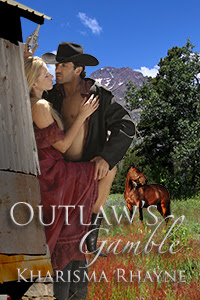 Slade is a half Native American man with nothing to lose and wants to sell his ranch. Jess is a stubborn, resourceful woman with everything to lose who is determined to buy it. What neither expected was to face was the biggest gamble of their lives.

Slade Blackclaw was a drifter with no desire to settle down and even less to become a rancher. However, with the death of his father he inherited the ranch that his cherished mother had adored until her death. Being half Native American afforded Slade no luxury in life and he's learned to take what he needs when he has to.
Jess Logan needed to work. Her father, William "Sly Bill" Logan, was growing deeper in gambling debt as each day passed. The last beating left him bedridden for more than a week. Though she hated him for all but selling her off to pay his latest debt, losing her mother at the age of six made Sly Bill her only remaining family and someone she would not turn her back on. She had less than three months to come up with the money owed or she'd have to marry the dirty, foul smelling Otis Grayson in order to settle her father's debt.
After returning to Blueridge, Montana to survey the ranch, Slade decided he wouldn’t stay. Having a permanent home was not in his cards. Taking out an ad at the local saloon, he acquiesces and meets the only person who replied. Little did he know, Jess was nothing like what he expected.

Jess knows she isn't what Slade had hoped for...let alone what he wanted. But with debtors closing in on her father, and very possibly her virginity, Jess will do anything or be anyone for Slade to save her father and, more importantly, herself.

Release is scheduled for late October with a full book tour beginning in November. To keep up on Slade, Jess, Sly Bill and the release of Outlaw’s Gamble, please visit any or all of the following: Website – Blog – Facebook and keep an eye out for prizes on the Tour Giveaway.

Years ago, Kharisma traded in snow, ice and tornadoes for sun, heat, sand and mountains. She now lives in beautiful Arizona with her husband, kids & rescue dogs and goats.

Now, in her eleventh year in Arizona, she is once again braving new terrain and has moved up into the White Mountains.  This will be the first year that she will see freezing temperatures and snow.

Her love for nature and animals is well known and she gets to indulge it in her new home with wolves, coyotes, snakes, and various other creatures as her nearest neighbors. Living in the middle of nowhere is something she wouldn’t change for the world.

When you pick up one of her books, she wants you to walk away turned on and inspired! Come take a stroll into Kharisma’s worlds of ecstasy, love, adventure and fear. Her website is here: http://www.kharismarhayne.com/ and you can also find her on Facebook: https://www.facebook.com/KharismaRhayne