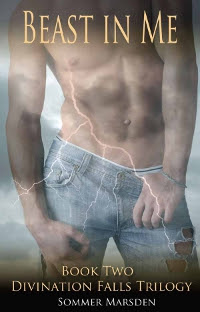 Weather worker Cameron Bale rolls into Divination Falls after being prompted by Spirit and Brother Lighting. He discovers that the small, hidden town full of shifters and magical types is suffering a series of unsettling events. There’s speculation from the town seers that he could be the answer they’ve been looking for. Cameron’s willing to try and help: he’s got nowhere to go and nothing to lose. His life is simply about loneliness and it turns out that Trace, a grumpy wolf with stunning eyes, knows just what that feels like. Cam finds himself wishing maybe they could be alone … together. Oh yeah, and battle whatever evil it is that still lurks in Divination Falls.