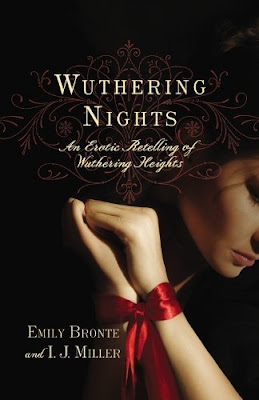 Romantics everywhere have been enthralled by Emily Bronte's classic novel of the tragic love between beautiful, spirited Catherine Earnshaw and dark, brooding Heathcliff. The restrained desire between these two star-crossed lovers has always smoldered on the page. And now it ignites into an uncontrollable blaze. In WUTHERING NIGHTS, writer I.J. Miller reimagines this timeless story to reveal the passion between Catherine and Heathcliff--in all its forbidden glory.

Set against the stark, raw beauty of the English moors, Heathcliff, an abandoned orphan, recognizes his soulmate in wild, impulsive Catherine, the only woman who can tame his self-destructive nature. And Catherine cannot deny the all-consuming desire she feels for him, despite his low birth. Together they engage in a fiery affair--one that will possess them, enslave them, and change their destinies forever...

THE INTERNET CHANGED MY NAME
by I.J. Miller

For most of my adult life I have been a two-career person.  There were many years that I was a full time writer who coached college tennis part time on the side.  There were many years when I was a full time college tennis coach who wrote part time on the side.  Now I am just a full time writer.  My first novel was published when I was (very) young, in the 1980’s.  Despite the book having explicit sexual content, I used my real name, the same one I used for coaching.  The book wasn’t famous and neither was I.  It was easy to keep the coach and the book completely separate.  Seven years later, it was out of print.  I even mentioned in my coaching bio that I was a published writer.
One day in the late 90s, one of my college players came up to me and said she saw my novel on Amazon.  I asked her what Amazon was and she explained that it was a website that sold books and that used copies of mine were available for purchase.  I told her that the book had strong sexual content, it would probably weird her out because I was her tennis coach, and that I didn’t want her to buy it.
A few days later she told me she bought the book.  I told her that no matter what she shouldn’t read it.
A few days later she told me she read it.  Worried, but curious, I asked her what she thought.  She said she hadn’t really read it, but skimmed it.  College kids.  We never spoke about it again, but about a year later, after becoming more website savvy, I searched my name on Amazon and saw not only the book, but that my player had written a rave review.
Either way, as the times got more conservative, and everything one did had a chance to explode in cyberspace, I thought it was best to keep the university employee and racy novelist as separate as possible.  I soon took “published writer” out of my coaching bio and published all of my subsequent erotic books under my current writing name, I.J. Miller.
Now that I am not coaching anymore I can probably go back to using my full first name.  But if I do, no one will find me on the internet.

Just before the light of dawn, not long after Nelly had left his bedside, the dark figure of Heathcliff moved swiftly along the moors. He carried nothing, for he owned nothing. He wore no shirt, for the one he possessed, a bloody mess, was left in the barn. He soon arrived at Black Rock Cragge, surveyed the surrounding landscape of the place he called home since arriving from Liverpool. To the north, was Thrushcross Grange. To the south, was Wuthering Heights. To the east, first light of day was about to break, but there was only a slight clearness above the horizon. The rest of the sky was a charcoal black of storm clouds.
Heathcliff stood, shirtless, at the edge of the precipice, fifty feet above the pool and sharp pointed rocks where Catherine and he had sealed their vow, arms rising up to the heavens, palms turning outward, as he welcomed the tempest.
The storm came rattling over the moors in full fury. The hard rain struck his face.  There was a violent wind, as well as thunder, and a bolt of lightning revealed a twisted smile on his face.
He had listened to his beloved speak of the many ways she loved another.
He had heard his darling say that to marry him would degrade her.
He had heard his most venerated speak words that violated their sacred vow.
He had allowed a cowardly bully to have his way with him.
He had endured the pompous and shallow Linton family separating him from his treasure as if he were trash to be tossed to the pigs.
He knew now that he could have had his way with Catherine at any time: in the garret on Christmas night, during their stolen moments in the fields, if he had wanted to take her the way he had Nelly this very eve and that she would have been powerless to resist the strength in his hands, the fire in his eyes, the hunger in his mouth, the forceful strength between his legs.
Even now….If he wanted her.
But after all that had happened tonight he could not see one, single, solitary way to have Catherine in the truest of forms. He could love her as Heathcliff: falling to his knees for the chance to place his lips upon her feet, rising each day simply to rest his eyes upon her loveliness, baring his soul just to receive her simplest of touches. But she needed more, much more. She needed Edgar as well. And though the lad was as spineless as a worm, he had the fair skin and blue eyes of a gentleman, the costume and manners of a man of dignified birth, the wealth and station of someone who could fulfill Catherine with the luxury of life at the Grange and the noble status of being called his wife.
What was the point if he could not have her completely and she would not be satisfied with all that was him?
But should they all be absent of the suffering that ripped through his soul as the storm whipped through the firs on the moors?
“NAY!” shouted Heathcliff to the sky, daring God to strike him down now if he so planned.
But as bolts of lightning came and went, from sky to ground, all around the moors, there was nary a flicker at Black Rock Cragge.
“Then a curse be on them!” cried Heathcliff. “A curse for a thousand years and more. I place a curse on the Earnshaws and Lintons, for all the pettiness you inspire, the meanness of spirit you invoke, and because you would not allow two people to love in the pure righteous way that lay buried in their hearts.”
A loud, angry bolt came crashing down, but it did not strike Heathcliff and he continued to smile.
“A curse on all those Earnshaws and Lintons living and all those to be born! For as I stand here on the cragge, as long as I draw breath, and even from the hell where I will surely land, I will reap pleasure from seeing each and every one of you suffer!”
Despite the rain pounding his face, Heathcliff let out an horrific, bone-chilling, bloodcurdling scream that paled the death cry of any wounded animal, a scream that startled awake and went down the spine of each Earnshaw and Linton like a razor splitting a soul in two—although they could not be sure it was human, animal, or just the storm they had heard—disturbing deeply every last one of them, including the baby curled inside Mrs. Earnshaw.
And then he jumped.