Please welcome my lovely friend KD Grace to my blog today. She's sharing all the details of her steamy new book Elemental Fire, the third book in her Lakeland Heatwave series - enjoy! 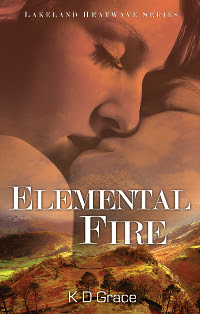 Obsessed with revenge, KENNET LUCIAN makes a deal with a demon, a deal he comes to regret when he meets TARA STONE, head of the Elemental Coven, and a powerful witch with a desire for revenge at least as great as his. Even though the attraction between the two is magnetic and the lust combustive, Kennet must betray her to accomplish his goal, which is ultimately her goal as well; to put a final end to the demon, Deacon’s, reign of terror. But can Tara trust the man who has wormed his way into her heart and the heart of the Elemental Coven? Can she trust LUCIA, the demon with whom Kennet is allied, a demon with her own agenda. The path to Deacon’s destruction is far from clear, and the price that must be paid to be free of him forever may be too high, even for Tara Stone.

K D Grace believes Freud was right. In the end, it really IS all about sex, well sex and love. And nobody’s happier about that than she, cuz otherwise, what would she write about?

When she’s not writing, K D is veg gardening or walking. She walks her stories, and she’s serious about it. She and her husband recently walked the Coast to Coast rout across England. For her, inspiration is directly proportionate to how quickly she wears out a pair of walking boots.