Please welcome Sommer Marsden to my blog to chat about her new release Haunted. I can't wait to get my hands on this one...! 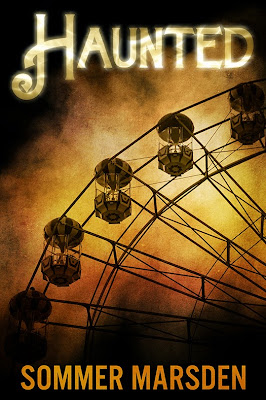 Two people lost and alone in life searching for answers…

Maddox visits abandoned sites to take photographs and figure out his future. He haunts the places that are monuments to the way he feels inside. Stark, empty, raw. And Olyvia searches for answers to her own painful loss by hunting ghosts. Trying to comfort herself by seeking proof of an afterlife.

One haunted amusement park with a dark history…

Maddox and Olyvia recognize kindred souls in one another. But a chance to fully explore their connection is a luxury they may not have. There’s a ghost stalking Screamland hell-bent on revenge. And it’s targeting them.

“Wait,” he said. It killed Maddox to draw away from her. Her thighs were wrapped around his waist, her body hot against his. But he had to. “Right back.”

He moved across the room and found his bag. In the inside zippered pocket were condoms. He grabbed one and moved back to her, his socks whispering across the dirty floor. It had grown chillier in the room, but he didn’t care. Not a lick.

“My dad wouldn’t let me join the boy scouts,” he said. “But I read the handbook.” He returned to her, pressing himself back against her and kissing her whiskey-tainted lips.

She shook her head. “Stupid,” she said. “I think kids should be allowed to explore and decide.”

He pushed her red-red bangs off her face and kissed her forehead. “Brilliant plan.” Maddox ground his cock against her, feeling the bite of the thick seam of her jeans. He imagined her, hot and wet and flushed beneath. His cock ached with the thought of her. With the idea of being with someone. Especially, this oddball, forthright, sensitive woman.

He’d never have given her a second glance in a bar. The whole dark clothes, bright hair, sad look…and she probably wouldn’t have even given him a first glance. On the outside they didn’t work. Not at all. On the inside, it was like finding a kindred spirit. A shadow the exact  same shape, darkness and density as himself.

She pushed his shoulders back, raised herself up slightly, and tugged her tee over her head. Beneath it, she wore a plain white bra with just a hint of lace along the tops of the cups, and he thought it was possibly the sexiest undergarment he’d ever seen. Simply because it was on her.

He worked the front clasp, and when it parted, he pushed back the cups revealing small, pert breasts with pale pink nipples. He stared at her for a moment, mesmerized by the small caramel colored freckles that dotted her chest. When he saw her take a shuddery breath, he shook his head and sighed. “You’re gorgeous, you know?”

Before she could answer, he sucked one of Olyvia’s nipples into his mouth. He swirled his tongue, feeling the soft skin pebble. He sucked and sucked again, and when she started to tremble he gently used his teeth. Her body arched up to meet his, her fingers tangled in his hair.

Sommer Marsden has been called "...one of the top storytellers in the erotica genre" (Violet Blue), "Unapologetic" (Alison Tyler) and "...the whirling dervish of erotica" (Craig J. Sorensen).

Visit Sommer at Unapologetic Fiction by visiting http://sommermarsden.blogspot.com or find her on social media.
Posted by Lily Harlem at 07:59