A Story That Even Shocked the Writer by Lucy Felthouse

Please welcome the lovely Lucy Felthouse to my blog today, take it away Lucy... 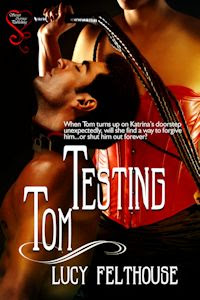 I didn’t plan the novella before I wrote it (I rarely do), so the tasks just flowed onto the page as I got to writing them. As a result, I managed to shock myself with some of the things I put Tom through. I’m not going to give anything away by telling you, but let’s just say things started off fairly easily for the wayward submissive and got to the stage where I was sitting, open-mouthed and staring at the computer screen, hardly able to believe the words that were appearing on them. There’s a seriously scary sense of humour going on there, and I’m not sure if it was mine, or Katrina’s. Or somewhere in between. Either way, it was a tad scary to see what sort of thing my imagination can produce. I just hope readers find it as fun to read as I did to write. And hot, of course.
Thanks so much for stopping by! Don’t forget to scroll down, add the book to your Goodreads shelves and enter the awesome giveaway.

When Katrina’s ex, Tom, turns up on her doorstep, he’s literally the last person she was expecting to see. After dumping her and running off with a vanilla chick, Tom broke the Domme’s heart and left her seriously hurting. So when he returns, begging for another chance, Katrina is understandably very confused and protective of her bruised feelings. She finds it very difficult to believe that he’s turned his back on a vanilla lifestyle for good and wants to be with her, a professional dominatrix. Rather than letting her head or her heart figure out what to do, whether to forgive him, she decides to put Tom through a series of challenges that will prove his devotion to her—or not. Testing Tom is not something she’d ever expected she’d have to do, but to her, it’s the only way she can be sure whether he’s back for good.

a Rafflecopter giveaway
Posted by Lily Harlem at 08:30