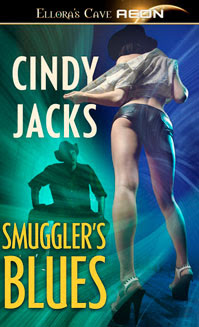 Book two in the Pirates at Heart series.

The year is 2017 and all is quiet on the eastern front. Good news for the war-weary Republic of Texas…bad news for weapons smuggling–pirate Captain Brett Logan.

Logan’s been a surly handful since war’s end—not to mention a rather perfunctory lover—and his wife Kate has had about enough. When an illicit business venture falls in his lap, Logan is eager to get back to outrunning and out-gunning the enemy navy.

Kate becomes an unwilling participant in Logan’s criminal enterprise, but in his element of excitement and danger, he’s the roguish daredevil she fell in love with. Their passion for each other burns hotter than ever—spurred on by the thrill of the chase. As she learns more about Logan’s wild side, Kate finds herself craving him body and soul as love, sex and adventure finally rid Logan of those pesky smuggler’s blues.

The familiar ping of rain falling onto a tin roof startled her. Thunder rumbled, louder this time. The storm had begun.
“What’s wrong?” He tilted her head up to look at him. His brow was furrowed, gaze studying hers. The concern in his expression disarmed her. Heavy raindrops beat a tattoo on the tin roof, adding to her fear and exhaustion.
She shook her head. Everything was wrong.
Seeming to read her mind, he nodded. “Stupid question, huh?”
Kathryn nodded and sighed. She wanted nothing more than to collapse into his arms, to fall into a dreamless sleep until this was all over. But it was nowhere near over. This ordeal continued to get more and more complicated.
Leaning her head against his chest, she listened to his strong heartbeat. “Do you—do you really think Dale killed someone because of my mistake?”
“No, not if he didn’t have to. Have some faith in basic human greed.” He jostled her.
The remark struck her as funny. She gave a weak smile. Maybe Brett was right. Or maybe he was trying to make her feel better.
“I really screwed up.”
“I screwed up. You’re only here because I… I should’ve stayed home when you asked me to pass up this deal.”
Home. It was all that she longed for, but the thought only brought on another wave of anxiety. Her chest grew tight and his words from the night before flooded back. He’d stolen the comfort of home from her too. Silent tears dripped down her cheeks.
“But you’re bored with me.” She huffed.
Lightning flashed outside, the wind picked up force. It swept through the poorly constructed shack, the oil lamp light flickering.
“Kate.” He smoothed her hair and pressed her into a hug. “Kate, I didn’t mean that you bore me.”
“Don’t try to sugarcoat it now.”
Tilting her chin up, he cupped her face in his hands. “I’m not. I bore me when I’m at home. This life—” He motioned to the shelter and the storm outside. “This is all I’ve ever known, and I just don’t know how to entertain myself otherwise.”
“I know I’m busy with the boys.” She went on as if she hadn’t heard what he’d said. “And I’ve never been the kind of woman who gets all dolled up—”
He cut her off with a kiss, his hand sliding around her waist.
“Stop.” She turned away.
Tangling a hand in her hair, he exposed her neck and planted a trail of kisses.
“You are—” He kissed down to her cleavage. “The most exciting woman I’ve ever known.”
His growing erection indicated the truth in his words.
“And that’s saying a lot,” she teased, his affection chasing away her self-doubt little by little.
Her pulse and respiration quickened, her sex grew warm and tight. He slipped a hand beneath her shirt, letting it roam over her bare skin as if it had a mind of its own.
“It’s not every woman who’ll assault me with my own wallet.”
Kathryn chuckled, holding back a squeal as he stroked the ticklish spot at the cleft of her ass.
“We can’t do this here.” She tried to extricate herself from his embrace.
“Why not?” Skimming his lips over her jawline, he pressed her closer.
“Because we’re fugitives.”
Oh God, they were fugitives. Strangers in a strange land. Well, it didn’t seem all that foreign to Brett.
Hand to his chest, she stopped his advances. “I didn’t know you could speak Reformlandish.”
Eyes heavy-lidded, he grinned slowly. “I speak a couple Reformlandish dialects. And Spanish. Some Cajun French.”
She arched an eyebrow, shaking her head. “How is it I didn’t know that?”
“Not much cause to use my language skills around the house.”
“What else don’t I know about you?” She leaned forward, inhaling his musky scent and the sweet whiskey on his breath.
His lips were so close that hers tingled, but he didn’t move for a kiss. Not yet. “I couldn’t say. You’ll just have to find out as we go.”
Running her fingertips up his arm, she imagined the landscape beneath his clothes. Since the day they’d met she’d made a road map of his body in her mind. The tattoos and scars, each ripple of muscle, every freckle, the tantalizing trail of hair that led from his bellybutton down to his cock.
Yes, she knew every inch of him. And she knew just how her body would react to his touch, his scent—her pulse pounding, her pussy swollen and wet. It was all delicious, but predictable. Even the routine they’d gotten into, making love right before bed. The song he’d sing her as she fell asleep.
But here, in the one place she never wanted to find herself again, she’d learned something new about her lover. She’d gotten to see the part of him he kept separate from their comfortable life at home. And though some of it shocked her and threw her off balance, there was something intoxicating about the outlaw whose arms wrapped around her.
Heat flared inside her, licking at her cheeks, her nipples, her sex. She surged forward, kissing him hard, her tongue invading his mouth. Caught off guard, he tumbled backward, chuckling, but spurred her on, his hands stripping off her sweater and shirt.
The cool evening air swirled around her breasts, her nipples drawing painfully tight. He leaned forward, capturing a bud between his teeth and rolling his tongue over it.
She gasped, pleasure rippling through her. Since they’d come ashore, he’d been in command of the situation, never once losing his cool. Now she wanted him in command of her body. She longed for him to tease her, overwhelm her and take her. Own her.

Find out more about Cindy and her fabulous stories on her website.