Today is the last day of Blisse Kiss with Heart. Thanks to everyone who has joined in the fun. A copy of Orchestrating Manoeuvres has gone out to Savannah  - I hope you enjoy. Tomorrow marks a big day in my calendar as it sees the release of That Filthy Book, my first co-author novel written with the awesome Natalie Dae (aka Emmy Ellis) 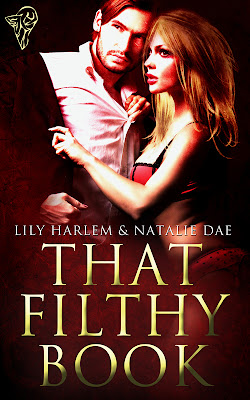 Snog - be warned, this book gets its name for a reason!!
“You ready?” he asked quietly.
The lust already pooled in my belly tugged at my pussy and clit, and my nipples peaked. I was more than ready. I had been ready for weeks.
“Yes,” I said, reaching for his offered hand.
He urged me up, helped me out, then wrapped a fluffy white towel around my shoulders. My skin was hot and tingly, the towel super-soft, as if my senses were heightened.
I leant into him as he smoothed his hands over my back, drying and warming me further.
“That was perfect,” I said.
Crooking his finger beneath my chin, he tilted my head. I stared into his face, his handsome, adorable face that I knew better than my own, and I felt my heart would burst with love. What we were about to do I could only do, would only do, with him.
There was only Jacob.
Our lips connected, and in a sudden flourish he scooped me up, holding me tight against his bare chest.
I linked my fingers behind his head as he kicked the door open and marched into our bedroom.
He searched my mouth with his tongue even as he lowered me onto the bed. I explored his mouth, too, absorbing his flavour, his texture, knowing I would never get enough.
As he dipped his head to my breasts, I noticed the candles set around our room. There was a hint of vanilla in the air here, too, and briefly I wondered if he’d been out and bought candles especially. James Blunt played softly on the stereo he’d brought up from downstairs, his voice dreamy and calming.
“Mmm, you taste divine,” Jacob whispered, nipping at my puckered areola.
I writhed for more. I wanted him to touch me all over. I was like a hot mass of wanton need infused with excitement. “Jacob,” I moaned. My patience had run dry. It was time for action, pain or pleasure I needed to know. I needed him inside me, inside my forbidden entrance.
He must have sensed my urgency. “Turn over,” he said and nudged me with flattened palms.
I willing rolled onto my belly.
Scooping his forearm beneath my hips, he raised me and eased a pillow, and another, beneath my body.
“Just relax and let me do the work,” he murmured, his breath warm in the hollow of my back.
“Yes, oh, yes, Jacob, please, now.”
“Patience.” He planted a hot, wet kiss on my left buttock and wound his fingers up my thighs, easing them apart so he could sit between them. “Patience, my love. Let me adore you in a way I never have before.”
I screwed my eyes shut and pressed my cheek onto the soft cotton duvet cover. This position was sexy as hell if he were about to fuck my pussy, but knowing his attention was going to be elsewhere gave it a whole new dimension. I squirmed and deepened the arch in my spine, offering my cleft up to his mouth as he kissed the globes of my arse.
My breathing quickened as he travelled the warm flat of his tongue down the crease between my arse cheeks. He kept going, right down low, until he was actually licking over my puckered hole.
“Oh, God,” I groaned into the mattress. Of all the things I’d imagined, having him put his mouth there was not one of them. My face burned. Even though I’d bathed… This was all so new, so… My whole life that hole had been mine, private, just known to me. And there was my husband, licking it. Could I cope with that?
The muscles in my legs tightened on his shoulders—my little warning that I was embarrassed—but he took no notice. Instead, he firmed his grip on my buttocks and stretched them apart, exposing my most secret place some more.
Letting out a groan of part mortification, part desperation, I twisted my neck to face the other way. The sight of the butt plug, my vibrator, and a tube of lube on the bedside table greeted me.
“Jacob,” I gasped, needing to say his name as a whirlwind of thrilling images besieged me. Images of what was going to happen next. “Jacob.”
He didn’t reply. He circled and laved with his tongue, tapping over the taut wrinkles of puckered skin and smoothing over the flat flesh toward my pussy. Embarrassment left me and in its place the wetness of his mouth created a burning, furious whack of desire that seared right to the centre of my soul. This was as depraved as it was utterly glorious.
You can read another, equally filthy excerpt by scrolling down the buy page, and don't forget, you can pre-order to ensure your copy arrives tomorrow.