Hot off the press is Beautiful Obsession by the awesome Juniper Bell. I completely adore all of Juniper's books and I am sure this one will be yet another fantastic addition to her impressive and seriously hot collection. 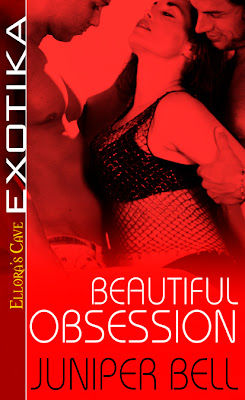 Jack Cartwright has put his wild sexual side firmly in the past so he can focus on his graduate studies. All he wants is to finish his thesis. But the appearance of three mysterious students in a neighboring suite throws his careful plans into chaos. Especially when he catches the three of them together…in bed.

Clare, Luc and Rob have a highly unusual relationship. Friends since childhood, the two boys rescued Clare from unimaginable horrors. They’ve been her protectors ever since, and something more. But Clare can’t stop thinking about the sexy, smoldering resident advisor down the hall, and what fierce urges might be hiding behind his controlled exterior.


A flash of clear gray shone in a sea of jeans and many shades of black—like the first wink of a star in a familiar night sky.Eyes. Gorgeous, mysterious eyes that sent a shaft of shocking lust straight to Jack’s groin. Squinting, he searched for those remarkable eyes again but the students had shifted position and that compelling moonbeam glance was gone.

Jack shook it off as a silly hallucination and joined the cafeteria line. He tuned out the din of “What’s your major? What’d you do over the summer?” chatter. Delving back into the question of Spartan law that had come up during a stubborn chapter of his thesis, he barely noticed what food the server handed him. It wasn’t until he scanned the crowded tables to find a seat that he saw her again. Her face came into sudden, stunning focus, like a camera snap-zooming on the most interesting image in the room.

Those eyes. Secretive, misty gray, one slightly more tilted than the other, as if an artist had deliberately included a flaw to distract from her oval-faced, Madonna-like perfection. Her hair was a dark spill down her back, with a careless pin holding it away from her face. She wore a white sleeveless blouse that revealed arms that were slim to the point of thinness. Her pale skin stood out among the students sunburned from their summer breaks. Her lips were far too full for her mouth, almost embarrassingly generous and erotic. One corner of her mouth curled inward, as if it had a scar. She sat close to the guy beside her and looked nervously around the dining hall with its arched windows and wall sconces. Her friend was big, brawny, walnut haired, silent. His fork looked as if it might break in his hand.

They must be new to Adams House. Sophomores or transfers from another house. Boyfriend and girlfriend, no doubt.

His cock surged. He fiddled with his tray as he ruthlessly willed away his erection. He’d gotten used to burying his sexual needs under research and grades and thesis chapters. His life was about graduate school now, not sex.

He forced himself to look away, spotted another graduate student waving him over, and brushed past the girl’s table. Damn if he was going to let a sexy student get to him. He knew better than that.

The Inane Scrawlings of Clare Gaston, AKA My Diary—September 15

Today Jack Cartwright walked past our table in the dining hall. I couldn’t take my eyes off his hands. I actually wanted to be the cafeteria tray. Ridiculous but true! His hands would be on me, then maybe on my hips, maybe on my thighs. I wouldn’t mind if he carried me naked through the dining hall and ate off my body. I’d want him to. That’s how crazy this is making me, has been since I first laid eyes on him.

J has the best hands I’ve ever seen. The palms themselves are broad and strong as a stonemason’s—that tray looked like a postage stamp, I swear. But the fingers look sensitive. I bet he knows just what he’s doing. I want to know what he knows. I want to feel what he knows on my body. Through osmosis. Which rhymes with neurosis. And diagnosis.

My epic saga class is paying off. I’m getting good at thinking up rhymes.


Wow, great stuff! If you want to find out more about Juniper then head over to her website.

Have a great day.