The Promise by Tory Richards 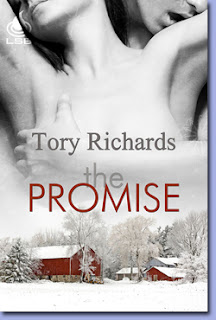 Blurb
Shannon Hayes’ husband David was killed in Iraq nearly a year ago, and now she must face her first holiday season without him. With a toddler in tow, she travels to the Vermont farm where the rest of the family has gathered for the holidays. There she comes face to face with the man who was with him when he died, and her destiny, his older brother Ryan.
For the first time in years, Ryan returns home to keep a promise he made to David—to take care of Shannon and their daughter. It’s a pledge Ryan is reluctant to keep because he’s been secretly in love with Shannon since first setting eyes on her. Their attraction to each other is instant, intense and soon the promise isn’t the only thing between them.

Also, and not to be missed, beginning June 1st The Promise will be making ten stops on a virtual blog tour at Goddess Fish Promotions. Below is the schedule. Each blog will have a different post or interview from Tory. There's a prize involved! So be sure to hop on and leave your comments.