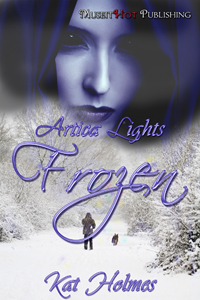 Today I just had to shout about a really great book I have just finished. It's called FROZEN and is written by Kat Holmes and let me tell you its one hot read!!
FROZEN is the first in the ARTICA'S LIGHTS series. Here is the blurb.
Brent Larkin came to Antarctica to study penguins. He didn’t come looking for either adventure or romance. But when a freak storm blows in and he loses his way, that’s exactly what he gets. Attacked by some bobbing lights, he suddenly finds himself in a wintry forest surrounded by men with swords pointed at him. The next thing he knows he’s in a dungeon and chained to the wall.
Awni is the queen of Artica, a land of eternal winter. The daughter of a god, Awni’s cursed to never know the touch of another. Her icy skin is death for anyone who dares to touch her flesh. But, when a mysterious stranger shows up in her lands, she finds herself drawn to him. Eager to learn about his world, she invites him to spend time with her only to be shocked when he touches her and doesn’t freeze to death.
But Artica is a land ruled by tradition. Though she longs to keep Brent with her, the laws of the land force her to send him home. But without him, both she and the land begin to suffer. Now, Awni is facing the same peril as one of her ancestors. And if she perishes like her ancestor did, all of Artica will pay the price.
Can Brent, returned to his own world, somehow find his way back and save her before all is lost?
I am certainly looking forward to reading more by Kat, she has great imagination and a wonderful way of making the unbelievable, believable.
Lily x
Posted by Lily Harlem at 08:29