Hi Kat, thanks so much for dropping by and telling us all about your latest release WORKING UNDER COVERS which is Book 1 in THE GODS AT WORK Series. 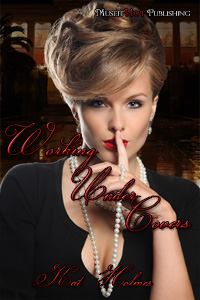 Blurb
Due to the economy, the Gods of Olympus are now forced to work among mortals. Aphrodite, Goddess of Love and Beauty decides to open her own Internet dating service in Los Angeles. Taking on the name Ariel Schell to hide her true identity, she opens Venus Connections.
Jordan Cade is a retired cop turned PI. But when several women go missing, his former boss drags him back for one last assignment. The only thing the women have in common is a dating service.
All Aphrodite wants is to earn a living. All Jordan wants is to find the missing women. But Fate has other plans and a little under covers work may be needed.
Excerpt:
“We have three missing women. They’ve never met and have nothing in common, except this service!”

Jordan Cade watched his old boss pace his office, frustration and impatience burning a network of implacable lines into his face. Pete Bruckney must be at his wits end. There could be no other reason he’d come to Jordan for help.
After serving twenty years as a police officer with the tenth precinct of Los Angeles, Jordan decided to leave the force and start his own private investigation firm. Two divorces and twenty years of dealing with humanity’s scum had been enough.
Find Kat at her website where amongst other things she runs a blog radio show. How cool is that?
Thanks for stopping by Kat.
Lily x