Doing good while being bad!!

Coming Together as One was a project I was involved in last year. Its a collection of ménage stories edited by the lovely Alessia Brio and all profits go to the charity One. 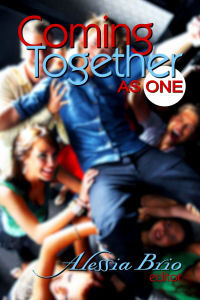 Authors donated stories and Alessia compiled them into one delicious paperback/e-book, however, several of the longer stories, including mine, The Actress, have been made into individual e-books and are available from All Romance E-Books for the fabulous price of $0.99 - again all profits go to charity. 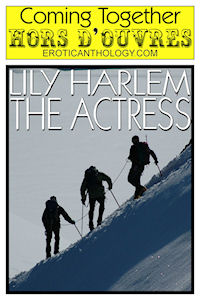 Here is the blurb for The Actress.
Sapphire Makepeace has lived her red carpet life of champagne, caviar and glittering Oscars to the fullest. But she's also used her celebrity to raise money for charity, one such endeavor included a daring expedition to the summit of mount Everest in which the world feared her early demise when she became trapped by a furious storm
It was this storm that resulted in the queen of cinema, Hollywood's angel, having a secret shared with only two men. Andy and Lee Driver, brothers, English, mountaineering adrenaline junkies.Fifty four years later their names still roll around her tongue a hundred times a day, because an encounter that extreme, that intense is one that lasts an entire lifetime.

Excerpt
I pulled at my helmet and yanked my gloves off with my teeth. My fingers were white, my nail beds blue. I tried to blow on the chilled flesh but my clouding breath stuttered and missed its target. I gave up and attempted to unzip my jacket. My unfeeling fingers refused to work. They just wouldn't do as I asked. I scrabbled twice and missed, unable to feel the small piece of metal I was searching for.
Lee saw my uncoordinated struggle. "Here," he said, reaching with a now gloveless hand and undoing the zip. He took hold of my left cuff and tugged the sleeve off my arm, then repeated the action with my left, freeing me from my damp jacket and revealing my black thermal top.
"Jeez, have you seen her fingers?" Andy said, grabbing for my wrist. "They're hypo."
Lee frowned, dropped his goggles around his neck, and then looked deep into my eyes. "Why didn't you tell us you were so cold?" His voice sounded both worried and annoyed.
"I… I didn't want you to think I was being all pathetic," I managed. "And besides, you two were coping all right. You're…you're not too cold."
"We've done it before, remember? Plus, we've got a bit more bloody meat on our bones than you."
Lee swept his eyes over my petite frame, and despite my painfully frozen thoughts, I noticed he lingered on the swell of my breasts. "Well, I s—s—stopped feeling so cold whilst you were doing the… the tent."
"Shit, Sapphire, one of the symptoms of hypothermia is to stop feeling cold." He reached out and popped open my waterproof trousers. "There's only one thing for it. Get these off, now."
"Why?" I said with a weak attempt at being indignant.
"Because, if we don't get your core temperature up a few degrees, the only role you'll be good for when you get back to Hollywood is playing a bloody corpse."
Lee worked on my boots, freed my feet, then grabbed the hem of my trousers and literally tipped me out of them. Andy fiddled noisily with the zips on the sleeping bags. "In," he instructed holding up the opening of the now one big sleeping bag. "Quick, before your hypothermia becomes irreversible."
I did as I was told and shoved my frozen legs into the silky insides of the bag. It felt smooth and soft against my thermal trousers, and I could hear the swish of the synthetic material as I moved, but it was still cold, my feet were still numb. I didn't have enough heat in my body to warm the space.
Next thing I knew, Lee was rooting in beside me in just his thermals, his big body hulking all the way down the sleeping bag and touching the entire length of mine.
"What are you doing?" I said on a shiver, unable to curl into a foetal position because of the way he was dominating the bag.
"Saving your life," he said. "Again." He turned on his right side and in a scooping movement pulled me tight against his broad chest. My breasts mashed against his pecs, and I bent my arms up into the cradle he created for me. His legs entwined with mine to create maximum surface area connection.
The heat pouring from his body was intoxicating; like a glass of water to someone dying of thirst or a cylinder of oxygen to a suffocating man. I whimpered pathetically and snuggled deeper into him. I closed my eyes and got a dose of his raw, male pheromones seeping though his thermal top. It didn't smell like Dean's sharp, citrus cologne. It was musky and natural, unfamiliar but delicious. It did strange things to my erratically circulating blood which began to pool pleasurably in my belly, creating a new type of heat that was inappropriate for the seriousness of the situation.
"Budge over a bit," Andy husked from behind my shoulder.
Lee shuffled me even closer, and I felt the long hard length of his penis pressing into my thigh.
I hope you have time to check out my naughty story, and if you do, be sure to let me know what you think, and while you're reading, remember you're doing good while being bad :-)
Lily x
Posted by Lily Harlem at 08:29

Email ThisBlogThis!Share to TwitterShare to FacebookShare to Pinterest
Labels: Lily Harlem, The Actress