It seems The Manic Machines have hit the spot with reviewer, author and editor Lucy Felthouse. Each book in my Mattress Music series has had incredible reviews - I'm happy dancing around the house!
Here is what she says about all three of these Ellora's Cave Quickies. 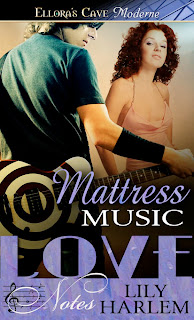 "I purposely didn’t read the first book in this series until the final one came out. My reasoning was simple – I suspected that once I started the series, I wouldn’t want to stop until it was finished. I was right. Mattress Music was such a good read that I barely managed to turn my Kindle off to write this review before starting book two.
Mattress Music is, I guess, what you’d call a long short story. It tells the story of Nina, a woman who is currently going through a bed-hopping phase which has suddenly become pretty ‘blah.’ Instead of getting smoking hot sex, she’s lost her ability to orgasm. It probably doesn’t help that she’s moved to a new flat and the walls are so thin that she has to play ‘mattress music’ to mask the noises coming from her bedroom.
That is, until Ian comes along. Despite the fact they barely know each other, he knows something is up with Nina, and he won’t rest until he finds out what it is. Soon, the pair find out they have more in common than they thought possible. But will Ian’s secret make or break them? Only one way to find out…
Wow. Mattress Music was a totally fab read. It was spectacularly written, had a great pace and was damn hot! Like I say, it took all my willpower not to dive into the next book immediately. But now I’ve written this review, I can! Mirror Music, here I come! Seriously, though, for a hot quickie, Mattress Music is a must-have." 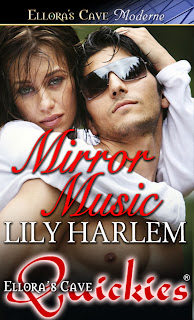 "Due to my immense enjoyment of Mattress Music, I dove straight into story number two from Lily Harlem’s series,Mirror Music.
I’m pleased to say I was equally impressed.
This book centres on different characters to the first. This time, we’re following the story of Robbie and Jenny, one-time neighbours and lovers, now not even talking.
But things have changed considerably since they were together. They were young and foolish, but now they’ve both achieved their dreams and nothing but Jenny’s stubborness is keeping them apart. Robbie hurt her all those years ago and it took her such a long time to get to a stage where the pain was even bearable that she’s scared of letting him back in her life.
Robbie is just as stubborn. When writing songs for her doesn’t work, he sends her tickets to a show at Wembley, along with a backstage pass. Eventually, Jenny relents and goes to see the show – and him.
Robbie’s delighted to see Jenny again – but will he succeed in making her realise they should be together again? Only one way to find out…
This was an awesome read. It was great to find out more about characters within the same world as book one. They’re equally likeable and there are plenty of damn hot sex scenes to be enjoyed! Another top read from Ms. Harlem. Book three awaits…" 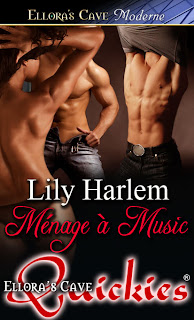 "If you haven’t seen my reviews of the previous two books in Lily Harlem’s music series, check them out: Mattress Music and Mirror Music.
Book three, Ménage à Music, took me by surprise. But in a totally good way: just when I thought things couldn’t get any hotter, they did!
Dealing with a third set of characters, Ménage à Music is the story of Sylvia. She’s been through a tough break up but has set herself a new challenge – to have a makeover and in the process, make over her mind, and move on.
It certainly seems to work. Her sexy new look instantly gets the attention of Tim and Dean, two brothers in the famous rock band she works for. In fact, the way they look at her makes her feel a little bit like dinner. Soon, though, she’s basking in their attention, and when she realises that not just one, but both brothers want to take it further, she’s faced with a dilemma. How on earth is she supposed to choose between the men? They’re both gorgeous and she wants them both.
It becomes apparent, though, that the brothers were brought up to share. And that includes women. Soon Sylvia is swept into a mind-boggling, toe-curling ménage with the brothers; and it looks set to become permanent.
This is a scorchingly hot read. The sex scenes are jaw-droppingly erotic and yet believable at the same time. By the end, any woman reading this naughty little tale will be desperately wishing she were in Sylvia’s shoes, and nobody would blame her. Phew!
A fab ending to the series. I have my fingers crossed that there are more stories from this world living in Ms. Harlem’s imagination, just ready to be coaxed out."

Leave a comment to be in with a chance to win the first in this series on Friday.