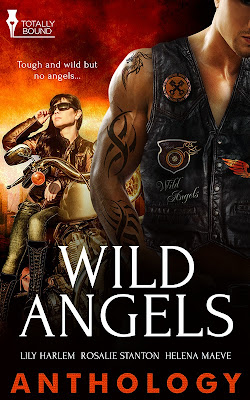 Check out the Wild Angels Exclusive!

When trouble rides into town, what girl can resist the ultimate bad boy?

Handling men isn’t an issue for me. I’m not a girly girl and my best friends are the machines I spend my days fixing, tweaking and servicing. So when the Wild Angels roll onto my forecourt and need my help, I’m happy to be of assistance.

But I’ve always been a magnet for trouble and when the leader of the pack, Gid, questions my ability, I can’t help the sassy backchat. Seems it doesn’t bother him too much and before I know it, I’m climbing onto his beast and hanging on for the ride.

Bad ass guys like him don’t come without baggage, though, and it seems he wants to get rid of mine. Who am I to complain when it means revenge is hot, his body is hotter and we leave a trail of burning rubber as we head into the sunset? Biker girl, me? I guess it’s in the blood.

She’s the only thing good about his former life, and he’s been asked to end hers.

Serenity Jones never expected her homecoming to be heralded with a double-murder, or that she’d be the lone witness. Yet when she points the finger at the president of the Lucifer’s Legion Motorcycle Club, she finds herself the target of more than just an investigation—she’s a liability, one Lucifer’s Legion is determined to erase.

Dash Denyar owes everything to Lucifer’s Legion. A decade prior, he set himself on a path of self-destruction, and would have crashed and burned were it not for the motorcycle club. His loyalty was bought and paid for—he just never expected the price of loyalty to include ending the life of Serenity Jones, the only woman he ever loved.

Serenity has dreamed of her reunion with Dash ever since she left her hometown behind. Never did she imagine it would be on the other side of a blindfold, or with her life in the balance. As she tries to work out what happened to her childhood friend, she finds herself battling more than just survivor’s instinct. Ten years of unspoken feelings, regrets, and what-ifs threaten to break her, if Dash doesn’t do it first.

Reader Advisory: This book contains scenes of kidnap, murder, references to drug use and suicide.

Grounds for Divorce by Helena Maeve

Overworked and jaded, Kayla is convinced she’s had her fill of bad boys when her boyfriend’s debts catapult her into a stranger’s arms.

A woman with a reputation, Kayla has long given up on true love. She’s thirty-three going on ninety-four, mother of one with a boyfriend who makes no secret of settling for her. When she’s not doing the books at the local strip club, she’s warming up the stage. Holding off the loan sharks is par for the course, until the night outlaw biker, Booker O’Connor, rolls into town.

Suddenly the bills come due and, in an act of desperation, Kayla’s boyfriend offers her up as payment for his debts to the motorcycle club. But their new leader has a reputation of his own.

Booker’s the real deal, from prison ink to bullet scars. No matter how sexy he may be or how much she’s growing to hate her boyfriend, Kayla has been with enough bad boys to know that she should fear callused hands and dangerous smiles. Striking out on her own seems like Kayla’s best option, but the Hell Hounds aren’t known for backing down quietly. She doesn’t expect Booker to give chase, much less discover that she doesn’t mind being caught by a man who can finally give her what she wants. 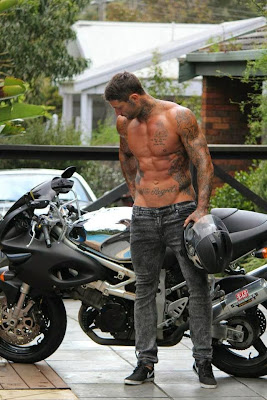 My story Burning Rubber will be available as a standalone purchase on the 2nd of January. 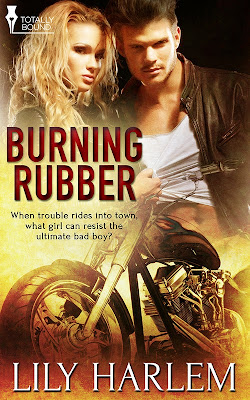 What makes bikers sexy? Find out my thoughts over at the ARe cafe.

My in depth interview on Goodreads.