HIRED is up for Book of the Week over at Whipped Cream Book Reviews. 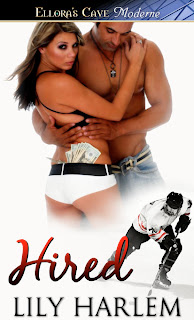 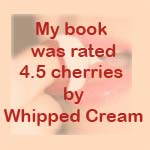 Here is what the reviewer said, and if you  like the sound of the book based on this, or you have read Hired and enjoyed it feel free to drop by and give Logan and Brooke a VOTE

If a deal sounds too good to be true, it usually is, but what happens if the deal is just too good to pass up? Even karmic payback won't get in the way.
Brooke’s life has never been easy. Her parents died when she was young, which led to the uprooting of her entire life. Her friend since childhood, Giselle, is now the only person Brooke can depend on. After a long overdue break-up with a boyfriend, Brooke turns to Giselle for a place to stay while she picks up the pieces of her life. Giselle’s line of work has afforded her an extremely comfortable lifestyle, but Brooke longs for a more fulfilling career in nursing. Just one thing stands in the way of attaining her dream – money. So when the opportunity of a lifetime is presented, Brooke accepts under one condition – no sex.
Logan is the star bad boy hockey player in desperate need of anger management. His reputation has earned him many loyal followers in the form of “rink bunnies” and paparazzi, but this has also lead to one too many times in the penalty box and not enough team wins. Too many career and personal foul-up’s have forced the team’s owner to send Logan on a retreat to get his act together. The retreat was designed to get Logan’s head back in the game, yet it also gave him something completely unexpected.
Ms. Harlem has now given me a newfound appreciation for hockey. Reading this story leaves little doubt that Ms. Harlem is a fan of the sport and now I am too! Readers should expect to be immediately drawn into the story and not allowed to leave until the last page. The dialogue and scenes flowed effortlessly.
Having a major focus on Brooke and Logan allows the reader to really connect and experience everything with them. It made for some intense emotional reading. The intimacy scenes between Brooke and Logan are exquisitely erotic with a dominating edge that will leave the reader breathless after reading each one.
Looking for a fantastic story with sun, sand, surf, and sizzling sex? Look no further! This new series is sure to please.
Posted by Lily Harlem at 07:53